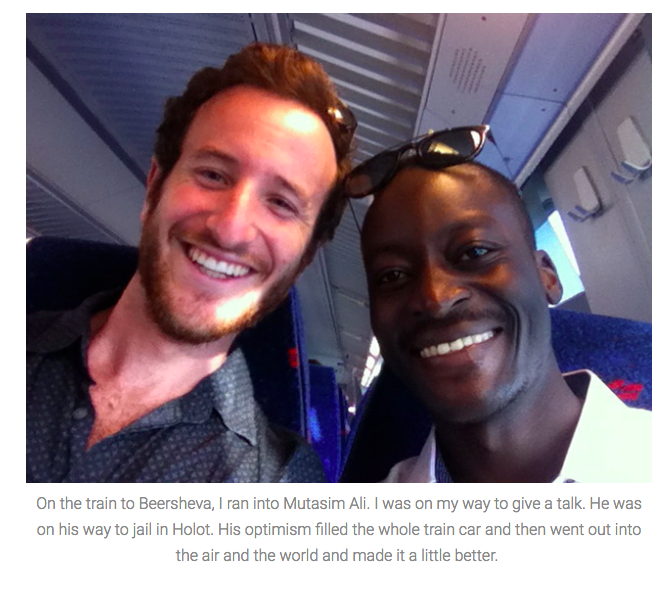 We didn’t know each other well, then, but well enough to say hello and sit down next to each other. I was heading to give a talk at Ben Gurion University. Mutasim was on his way to report for arbitrary detention at the Holot Detention Center. We talked nonstop for the next hour, and then I got off in Be’er Sheva, and Mutasim continued south.

I remember being blown away by his smile, his grace, and his conviction that he would win, even as he was on his way to be imprisoned, his only crime being the fact that he was an African refugee and asylum seeker, in a country in which asylum seekers are arbitrarily imprisoned and detained and mistreated and denied basic dignity.

Mutasim spent about a year in the detention center, and emerged unbroken. We became friends in the time that followed, shared meals together, met with groups together, (retweeted each other), and I have followed his work and activism with huge admiration and awe (and have been updated consistently by my partner, Kayla, who is also a dear friend and colleague of Mutasim’s, and works alongside him through her job at HIAS, providing legal aid to refugees and asylum seekers).

And then, today, on June 23rd, 2016, I heard from Kayla, with tears in her eyes, that Mutasim had texted to tell her the news: he had been recognized as a refugee. This is the first time in history that a refugee from Darfur has been granted asylum in Israel.

This is a beautiful day for every human being here, refugees and non-refugees alike. Mutasim, you are a hero. You have made –and you continue to make– this place better, more decent, more fair, more human, for all of us.