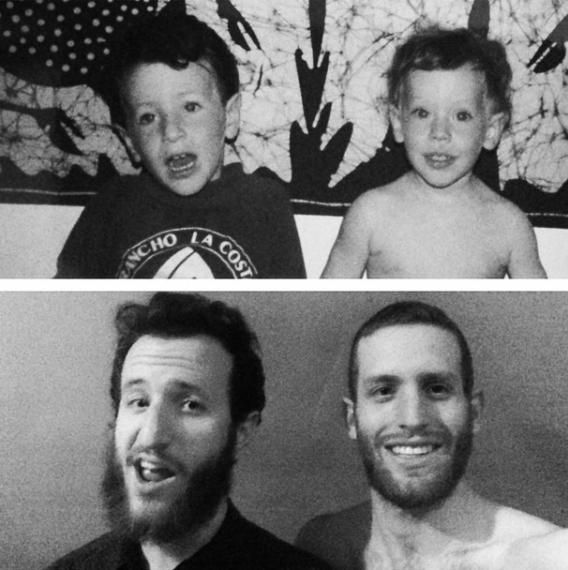 Hi friends. Here is an update I wrote a few days ago, regarding Jesse, my younger brother and best friend, who was hit by a car last week. I will be stateside and offline for a while, now, as the process of recovery unwinds before us.

As most of you know, my younger brother, Jesse, was hit by a car last Tuesday, while biking home from Rosh HaShana services in Berkeley, CA. He was brought into the ICU in critical condition, and I am so staggeringly grateful to be writing to you with the update that he is improving every day: he had a traumatic brain injury and fractured his C6 vertebra, but he is able to move all of his limbs, and has been walking with support from nurses, and while he is still feeling confused and periodically agitated, the improvements mentally feel pretty miraculous.

My parents, my sister, and Kayla and I all flew in to Berkeley as soon as we heard, and have been rotating bedside shifts along with Jesse’s partner, Chloe, and her mother and brother. For days now, Jesse has recognized and known all of us. He is fuzzy about the details of the past few weeks, and why he is in the hospital (“Jess, do you know why you’re here?” “Yeah, Mor, I got in a bad fight with Donald Trump Jr.”) It’s been an incredible feeling to be able —armed with the knowledge that he is going to get better — to laugh as the sweet and silly things he’s said over these past days. He was moved out of the ICU into a Step Down unit, and then was moved today to a rehab facility in Vallejo, CA: his progress is incredible, and encouraging, and beautiful, and good.

And more than that: Beyond all of the facts and details and medical issues, he is still himself — incredibly sweet with all of us and with the hospital staff, graceful and generous and gentle and kind and good and decent.

The word gratitude does not even come close to summarizing what I’m feeling, what we all are.

I haven’t been able to respond in depth to all of your emails and text messages and phone calls, and am not sure that I will be able to in the near future, but I want you to know how much it has meant to me, and to my family, and to Chloe, and to Jesse, too, to get all of these notes of support and love from you all. That there are so many people who love Jesse, all over the world: I actually do believe that that has had an impact on his recovery, and that the love and goodness has actually poured into his body, and into mine.

He is not quite at the point where he is able to read things on his own, but if folks wanted to send over messages or voice recordings or poems or anything like that that you’d like me to read to him, I’m sure he’d love that.

We are all staying in Berkeley, for a while. A family who is part of one of the Jewish communities here was incredibly generous, and leant us their home while they are abroad for the next month, and we have so appreciated the meals that folks have cooked and bought and sent over. These days have been a blur – I feel a little like I’m waking from a nightmare, but there is still a lot of fog around everything, with jetlag and emotions and sleeping at bizarre hours so we can sit with Jesse in the night, et cetera.

I went on a run in the hills for the first time since his accident on Saturday, and I met an exchange student from Catalonia who was also running, and I sort of just burst out and told him about everything, and he was a great listener, and said to me that it must be hard to find words for all of this, and he was very right, but as I ran home, a few words came to me that felt like at least the beginnings of an approximation:

The world was flickering

Now the light is back.

Speaking of running: One of the neurologists we consulted, thanks to connections from family and friends, wanted us to keep in mind that this is not a marathon, it is an ultramarathon (and he said this not knowing anything about my running habits). The road to full recovery – and we are really confident Jesse will make a full recovery – is going to be a long and difficult one, months and months, maybe more. It was an important reminder, and I think what I’d ask of you all is just to keep sending prayers — as we enter Yom Kippur, and then after — and love and support and sweetness, and, if you have a moment down the road, to check in and send love also in a month from now, or two months from now, or later than that even.

I’ll continue to update, and feel free to pass this along to other folks who might want to hear this update. I’ll be here for a while. I’ll be sporadic with my emailing.

In short, I mostly just wanted to say thank you, and to let you know that Jesse is doing better, and that he is, be’ezrat hashem, with god’s help, and with all of your support and love and prayers and solidarity and generosity, going to keep getting better and better and better, amen.

[Update, November 11th, 2016]: Jesse continues to make amazing progress, and is healing bravely and gracefully and beautifully, surrounded by friends and family. I am still here in Berkeley with him, and we have been so immensely appreciative of all of the love and support that has flowed and continues to flow our way from so many corners of the world, even — especially — in these darkened times. (After Trump won the elections, exactly five weeks after Jesse’s accident, Jesse said, “I’ve really been forced to reckon lately with the fact that in life, awful things can and do happen suddenly, and all we have to hold onto is the present moment, and love.”)

Jesse and his partner Chloe, after voting on November 8th.

Jesse and one of our best friends from Yellow Springs, Nick, walking along the water at sunset in Berkeley.