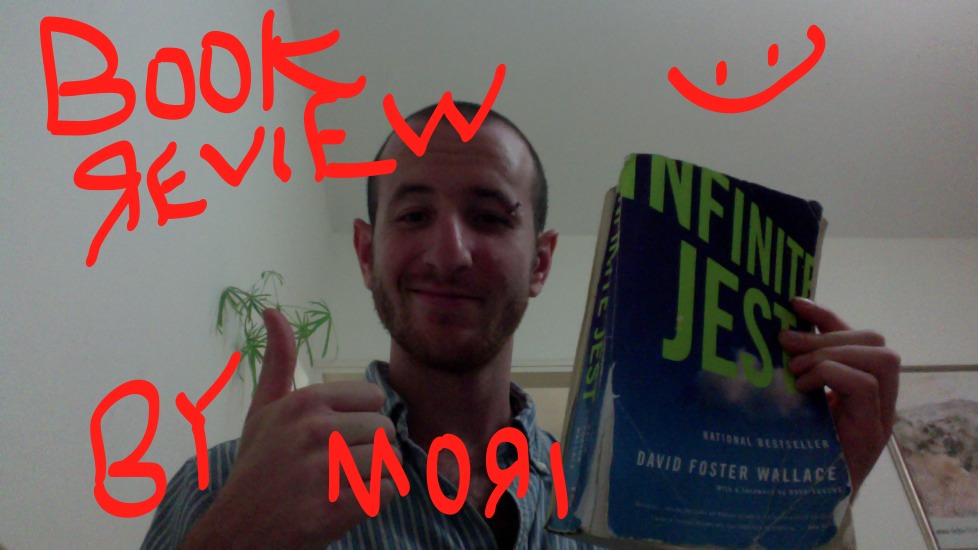 So. Instead of just writing about my reading experience, my own Writer’s Voice too confused and heavy with attempted-emulation to be bearable, let alone anything else, I think that I will simply quote a few the lines and passages from David Foster Wallace’s Infinite Jest- one of the most Biblical (not to blaspheme) secular books I’ve ever read, in its complexity, self-referentiality and weight (physical as well as emotional). I think I will simply quote a few of the many lines and passages from Inifinite Jest that most struck me through either their acerbic-social-critique and unabashed-lingual-joy-and-cleverness or their almost-unbearable-tragedy-made-bearable-through-profound-and-maybe-even-life-altering-other-directedness (this phrase, other-directedness, is borrowed from DFW himself, and although he generally uses it semi-sarcastically (in his “This is Water” speech at Kenyon; on page 138 of Brief Interviews with Hideous Men). I think it is really what Infinite Jest is aiming at, and it is why I draw so much inspiration from his work, this idea of crawling just far enough out of the ravines of our own self-directed internal universe that we can truly act and live in a way that is other-directed, and when we fall back into the caves, we can be lifted back out again, perhaps through reading and rereading that which reminds us to be other-directed, DFW’s work being, of course, only a few of so many examples of such.

All of that said, I do want to insert three caveats into this over-ambulatory preamble.  (1) If you read the first 200 pages of the book only, you might not like it. You have to commit to reading at least the first half of the 1,100 pages (reading this book took me longer than any novel I’ve ever read). Otherwise don’t read it. (2) There is something that feels not-completely-safe about this book. The best analog I was able to come up with is hallucinogenic mushrooms. You can have an incredible, POV-altering experience through it, and it also might even help you become a better person, as Dave Eggers (another author I am a big fan of) says in his intro to IJ, but it can also send you into very dark, mazelike places if you let it take control. I found that at various internvals I needed to put the book down and balance it with something ultralight (so pronouncedly NOT television), jogging or having a snack or piercing my eyebrow or something. So read it, but read if you take it seriously, also take seriously the darkness and confusion and weight of the dark, confusing and weighty parts of the book.  (3). It is important for me not to emphasize that I do not intend to Deify David Foster Wallace. Like really important. He was a brilliant brilliant writer. Probably one of the best I’ve ever read. But he was also a deeply troubled and sick person who killed himself. My brother, Jesse, had me read an essay by DFW’s friend and colleague Johnathan Franzen, which I found both moving and sobering:

“He [DFW] was sick, yes, and in a sense the story of my friendship with him is simply that I loved a person who was mentally ill. The depressed person then killed himself, in a way calculated to inflict maximum pain on those he loved most, and we who loved him were left feeling angry and betrayed. Betrayed not merely by the failure of our investment of love but by the way in which his suicide took the person away from us and made him into a very public legend. People who had never read his fiction, or had never even heard of him, read his Kenyon College commencement address in the Wall Street Journal and mourned the loss of a great and gentle soul. A literary establishment that had never so much as short-listed one of his books for a national prize now united to declare him a lost national treasure. Of course, he was a national treasure, and, being a writer, he didn’t “belong” to his readers any less than to me. But if you happened to know that his actual character was more complex and dubious than he was getting credit for, and if you also knew that he was more lovable–funnier, sillier, needier, more poignantly at war with his demons, more lost, more childishly transparent in his lies and inconsistencies–than the benignant and morally clairvoyant artist/saint that had been made of him, it was still hard not to feel wounded by the part of him that had chosen the adulation of strangers over the love of the people closest to him.”

[From Franzen’s ”’Robinson Crusoe,’ David Foster Wallace and the island of solitude.”]

Ok. Caveats listed. Back to raving. So. First. Other-Directedness. He says it all succinctly -and directly- in his aforementioned “This is Water” speech, probably his most widely read piece in my college-circles, as it is a helluva lot more digestible and bite-sized than Infinite Jest’s 378-footnote 1,100 page extended version of what I think is more or less the same ideas- but I hope to make the case (for I have to make some case, do I not, on this blog usually devoted to political posturings and strident denunciations and nunciations, et cetera) that if you are moved by “This is Water,” or even by the quotes which I still haven’t gotten to adding, that you must read Infinite Jest. There he writes like this:

“That sometimes human beings have to just sit in one place and, like, hurt. That you will become way less concerned with other people think of you when you realize how seldom they do. That there is such a thing as raw, unalloyed, agendaless kindness… That everybody is identical in their secret unspoken belief that way deep down they are different from everyone else. That this isn’t necessarily perverse. That there might not be angels, but there are people who might as well be angels.” (pp. 203-205).

As shown in this segment, which is what my brother says is from one of the best sections on his book, and I have a hard time disagreeing, in addition to being stunning, DFW’s writing is searingly clever. The delicious aftertaste of his puns and stunning, snarky and sympathetic observations about existence lingers in the margins of most pages (such that about a hundred footnotes in, all of my irritation with his footnotism had morphed into excitement at every tiny number there to signify another chance to drink from the cup of the purest incarnation of DFW’s wit). With that, though, I think there is something almost grotesque about the fact that on my paperback version of Infinite Jest the book is billed as a “Gargantuan, Mind-Altering Comedy…” This statement isn’t attributed to any reviewer on whom I can pour frustration. It was probably the editor. Who probably didn’t really read the book. This book is not a “Comedy.” It is extremely funny, and at many intervals, I did laugh out loud (interestingly, not something that I generally do while alone, which fact leads me to ruminate on how laughing out loud- in movie theatres or at friends’ jokes- has much more to do with wanting to share something than it does about pure content or uncut humor. Which fact is not necessarily negative). But his book contains some of the most throatclenching, blade-like sadness, alienation, fear-of-sadness-and-alienation I have ever encountered in a novel:

“It occurs to Gately that right now’s just like when he was a tod-dler and his Mom and her companion were both passed out or worse; no matter how frightened or scared he might become he now again cannot get anybody to come or to hear or even know about it… Alone, worse off than a toddler that could at least bellow and yowl, rattling the bars of its playpen in terror that nobody tall was in any shape to hear him… Gately’s best thoughts were really communiques from the patient and Abiding dread.” (pp. 923).

But so while A Comedy this book is not, it is made bearable, drinkable, incredible by the constant insertion of comedy into the darkness, light even in the caves of empty. And his control of language and letters is just art. Seriously.

‘…professional conversationalist knows his mucous membranes, after all.’

‘I might have to burp a little bit in a second, from the soda. I’m alerting you ahead of time.’

‘Hal, you are here because I am professional conversationalist, and your father has made an appointment with me, for you, to converse.’

And also the just brilliant language use that is less lol funny and more… true-feeling, good-obserservation-chuckle-inducing:

“…and one of the really small E.T.A. kids crawling around with a bottle of adhesive under the tables has whacked his head on the sharp edge of an institutional chair and is in Avril I.’s lap crying with a desolate late-day hysteria that makes everybody feel jagged.” (pp. 438).

DFW also does a lot of my favorite brand of snarky political-system critique, replete with disdain and quiet, enormous anger at the forces of exploitation that have metastasized such that they are much larger than any individual or even group of individuals, which anger and snark are shaped by the recognition of their functions as a shell for empathy with [most of] the individuals both afflicted by and afflicting on behalf of these systems and forces:

”The American Century as Seen Through a Brick’s main and famous key image is of a piano-string vibrating — a high D, it looks like — vibrating, and making a very sweet unadorned solo sound indeed, and then a little thumb comes into the frame, a blunt, moist pale and yet dingy thumb, with disreputable stuff crusted in one of the nail-corners, small and unlined, clearly an infantile thumb, and as it touches the piano string the high sweet sound immediately dies. And the silence that follows is excruciating. Later in the film, after much mordant and didactic panoramic brick-following, we’re back in the piano-string, and the thumb is removed, and the high sweet sound recommences, extremely pure and solo, and yet now somehow, as the volume increases, now with something rotten about it underneath, there’s something sick-sweet and overripe and potentially putrid about the one clear high D as its volume increases and increases, the sound getting purer and louder and more dysphoric until after a surprisingly few seconds we find ourselves longing and even maybe praying for the return of the natal thumb, to shut it up.” (pp. 695).

And so but -another DFWism that I found absolutely genius, his starting sentences littered with hyptererudite words I’d never even seen before with “And but so,” and also his like insertion of “like” without double-commaing it to assure readers of his irony- I don’t think he used “And but so” and “like” mockingly or ironically. Rather really writing as his characters (and most of us) would speak, even as he uses words that are completely and entirely removed from how [most] one[s] would speak). And so but this book is just brimming with brilliance. I’ve already gone on too long (I don’t think I’ve yet earned my right to take so so much more page space to say what I what to say than I need to). Read the book. It is like unbelievably just good. And it’s good for our 21st century Facebooky souls to read paperbacks, even while remembering:

“That concentrating intently on anything is very hard work.”