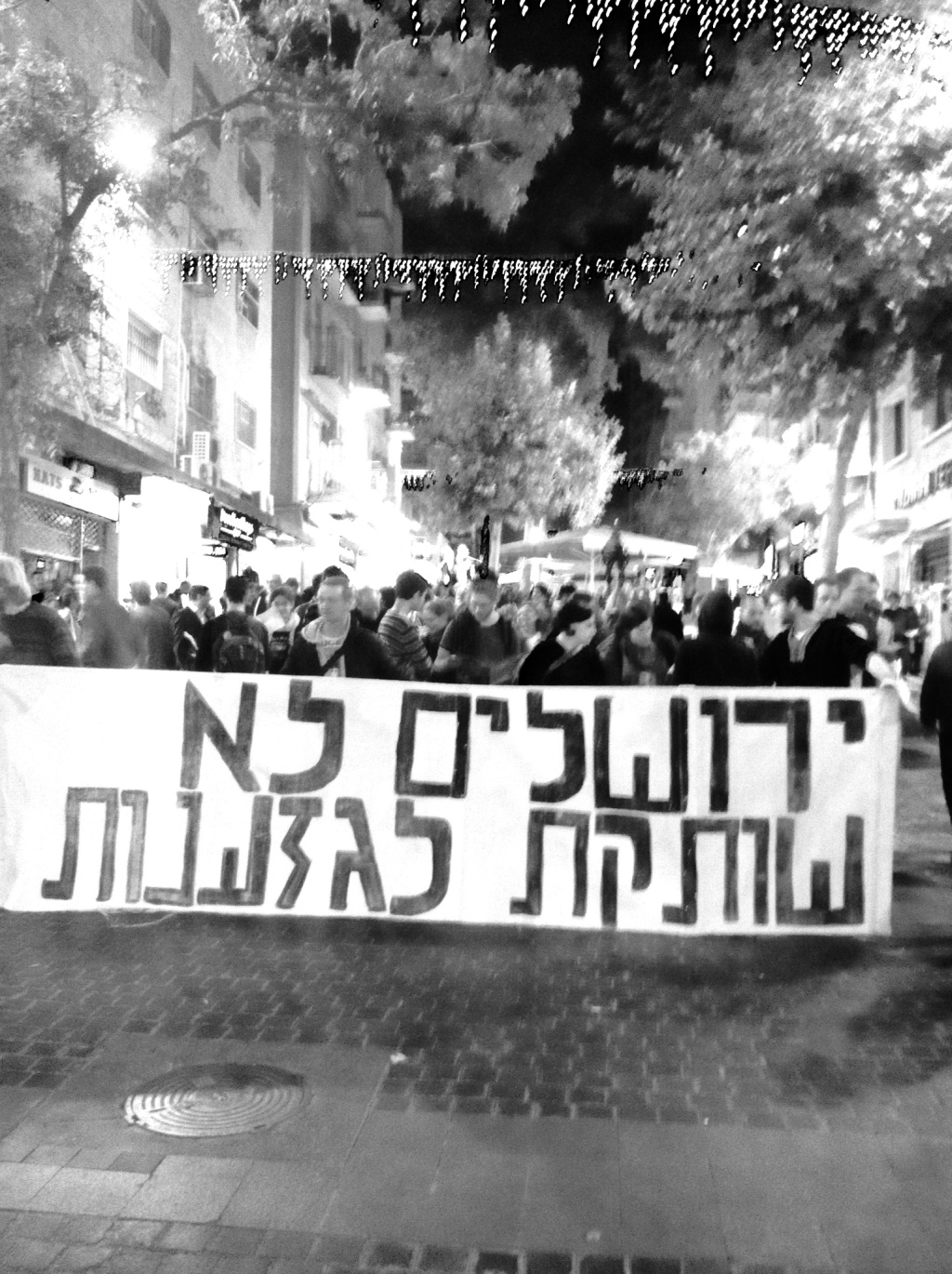 I returned to Israel-Palestine in the middle of last week, and soon after getting back, I received the same email from six different friends, activists and activist listservs (the emails and Facebook event were all in Hebrew, I’m translating some of it below):

“This past summer was filled with racism and hatred. Chants of “Death to Arabs” became a daily occurrence, and attacks against Palestinians in Jerusalem happened every night. Jerusalem’s public has quickly returned to routine, but we [the organizers] have not forgotten what happened. We refuse to accept the reality of racism that is solidifying under the artificial veil of silence… On Saturday evening, 10.19.2014, at 9PM, we will meet in the Mashbir plaza and speak in a clear voice against racism. In large numbers, we will assert our power in the public sphere in Jerusalem, hand out information explaining our messages, and show that Jerusalem will not be silent in the face of racism.”

There had been a similar event the week before, and a few hundred activists had showed up to Zion Square, to hand out flyers against racism in the same space in which activists from Lehava, (an anti-miscegination organization that focuses on opposing marriage or dating between Jewish women and Palestinian Arab men; their name is an acronym in Hebrew for “To Prevent Assimilation in the Holy Land”) are constantly present, handing out materials such as this: 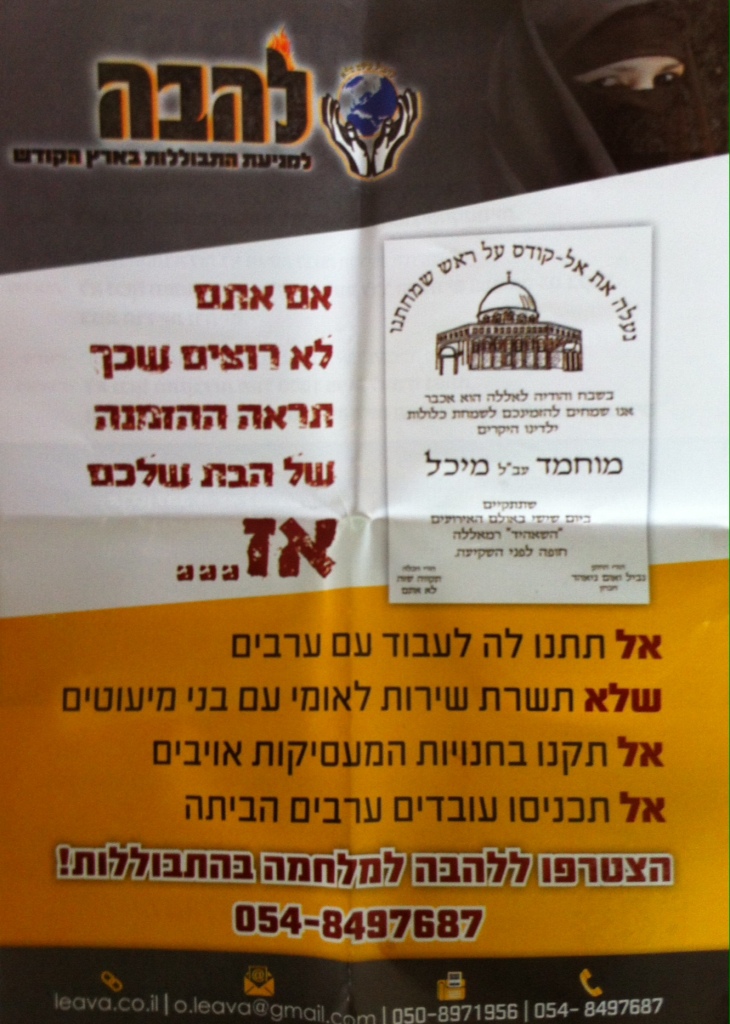 Lehava. To Prevent Assimilation in the Holy Land.

[Mock Wedding Invitation, on the Right]:

“We shall elevate Al-Quds above our joy.”

In praise and gratitude to Allah Hu Akbar, we are pleased to invite you to the nuptial celebration of our beloved children:

That will take place on Friday in the “Shahid” Events Hall in Ramallah. Chupah before sunset.

Parents of the Groom: Nabil and Um Jihad, Hebron.

Parents of the Bride: Hopefully not You.

[In block red letters, on the left]:

If you don’t want your daughter’s wedding invitation to look like this, then…

DON’T allow her to work with Arabs

DON’T let her do National Service with minorities

JOIN LEHAVA IN THE WAR AGAINST ASSIMILATION!

In addition to the vicious public racism of this past summer, and the vicious casual public racism of flyers like these, physical attacks against Arabs/Minorities/Enemies are still happening on a regular basis. Just two days ago, a group of 11 extremist Jews attacked Muhammad Azzam, 20, at his place of work in the Rimonim Shalom Hotel in West Jerusalem. It is against the backdrop of such sickness that the “Jerusalem will not be silent” event was organized. Here are a few snapshots and reflections from the event: 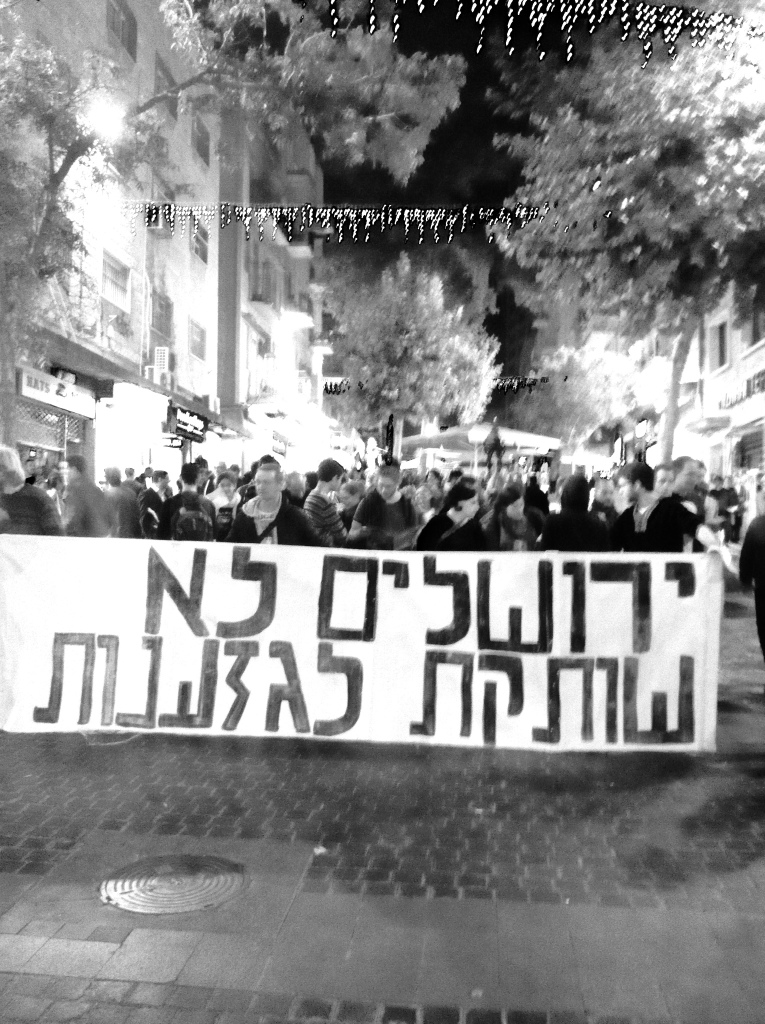 “Jerusalem will not be silent in the face of racism.” The banner was large and simple. There weren’t chants or other trappings of a demonstration. But there was something powerful about seeing these words on public display amidst the booze and tourism and singing Japanese Christians and South America Stand with Israel Banners, and, of course, the Lehava kids. 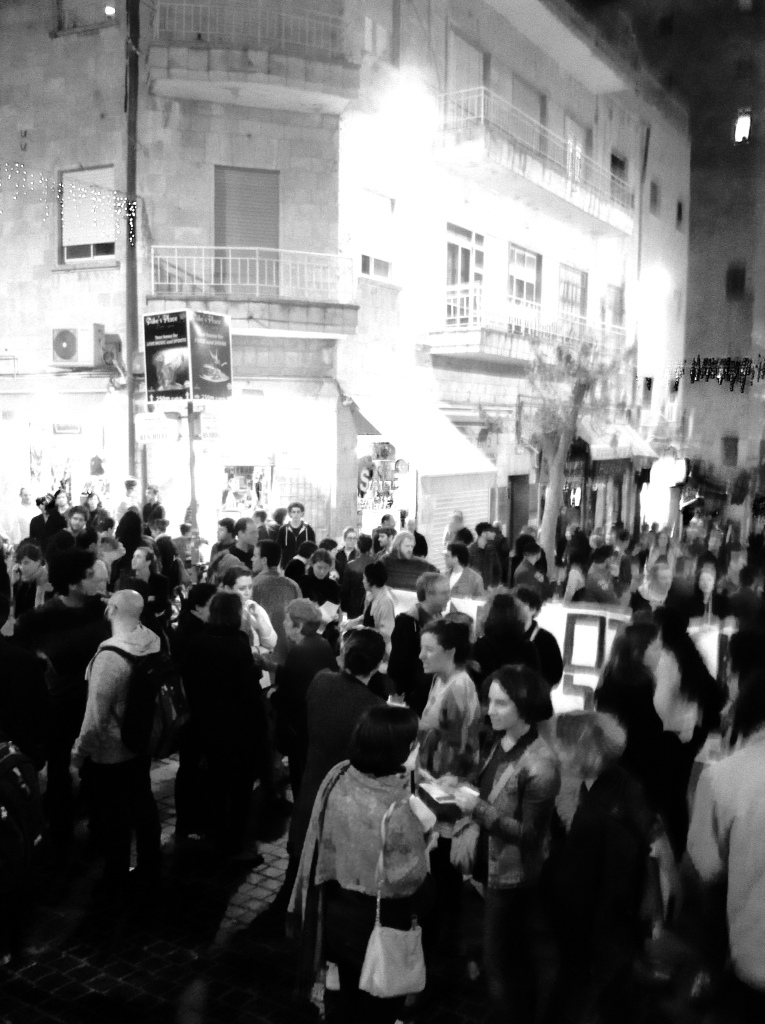 According to my non-expert, non-helicoptered counting, there were probably between 150 and 200 activists there, handing out flyers, speaking with passersby. One note about the air: There was antagonism, but it was not tense and scary like every public voicing of dissent had been this past summer. 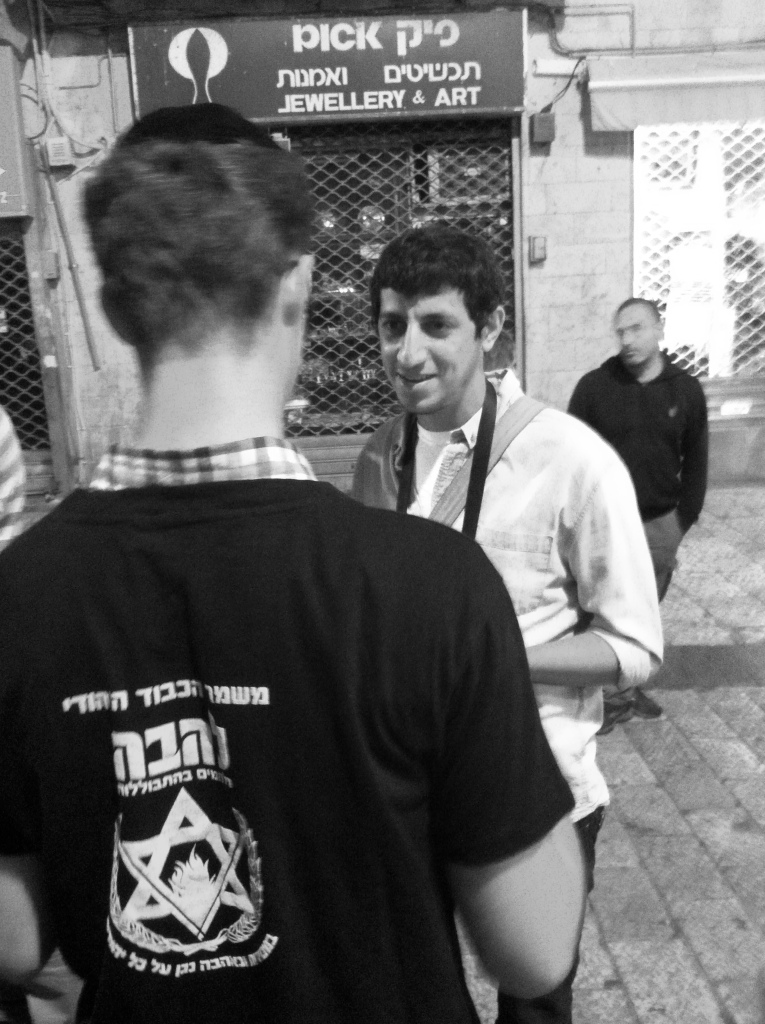 The shirt with the flaming Jewish Star (god help us) is a Lehava shirt. The slogan above it says: “Jewish honor brigade.” This is a reference to “preserving the honor of Jewish women from Arab men.” It’s hard to imagine a slogan and a group that does more dishonor to the Jewish past and the Jewish people and to Jewish women. Kudos to the guy in the white shirt for trying to engage this kid. 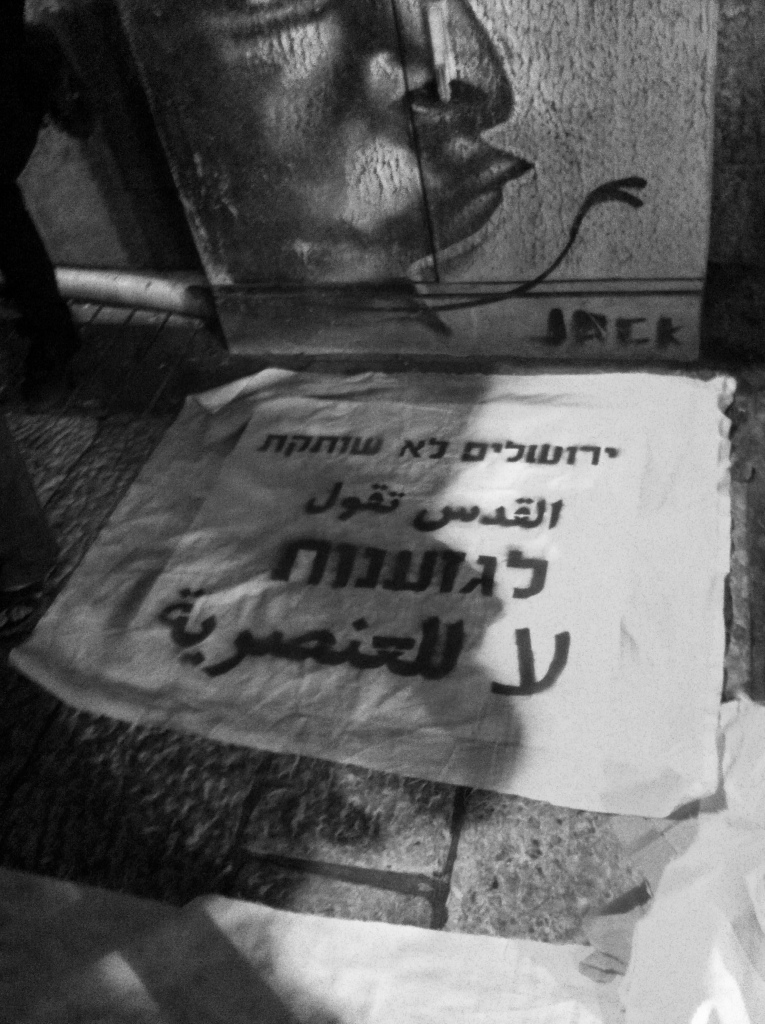 In Hebrew and Arabic the spray-painted sign says: “Jerusalem says- No to racism.” The very act of speaking in/writing in Arabic the public sphere in West Jerusalem has become something subversive. It is devastating that it is so, but it is so. So. A sign in Arabic is a step in the right direction, and it is a good and decent thing. Overall, the action was that: Good and decent. There wasn’t any major clash, or anything that would draw headlines (except of course from the ever-awesome folks at places like Sikha Mekomit), but it meant something. I don’t think this is the genesis of a mass movement, but it is movement, and that is massively important in this stagnant swamp of alternating racism-complacency. One of the fliers that the Jerusalem Will Not Be Silent folks were handing out was for the next action, this Tuesday, at 3:45 PM: 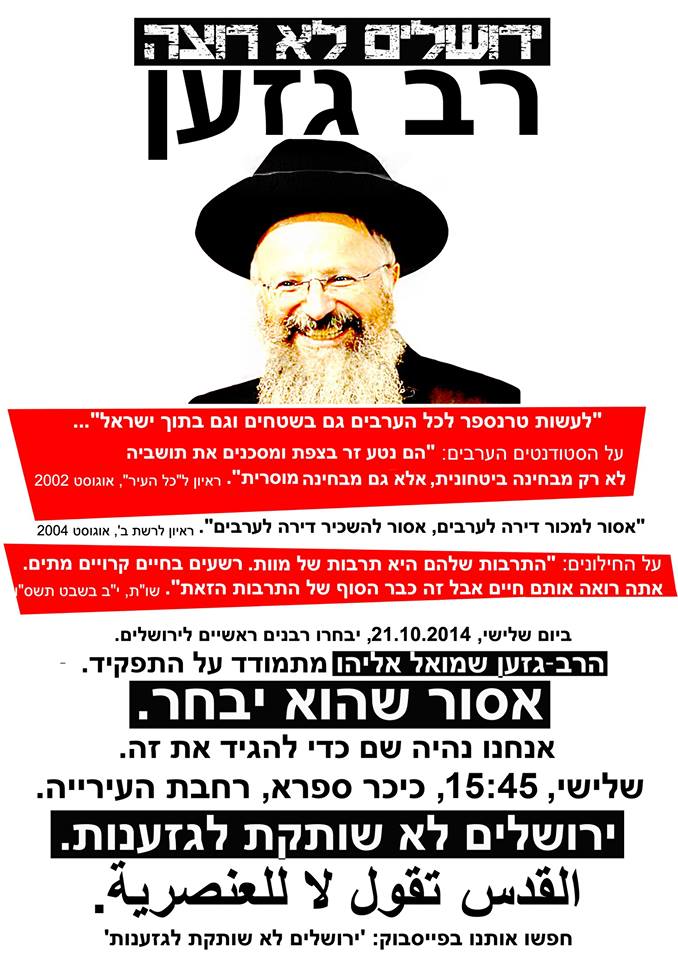 Jerusalem Does Not Want a Racist Rabbi

About Arab students [in Safed College]: “They are a foreign implant in Safed and they endanger its residents, not only from a security standpoint, but also from a moral standpoint.” (Interview with “Kol HaIr, August 2002).

About secular Jews: “Their culture is a culture of death. Wicked people in life are called dead people. You see them alive, but this is the end of this culture.” (Responsa, י׳׳ב בשבט, תשס׳׳ו)

On Tuesday, 10.21.2014, Jerusalem will elect its chief rabbinate. The Racist Rabbi Shmuel Eliyahu is running for the position. HE MUST NOT BE ELECTED.

We will be there to say so.

Jerusalem Will Not Be Silent in the Face of Racism (Hebrew and Arabic).

I’ll be heading there on Tuesday, and will update via Twitter @Moriel_RZ (and then probably a blob post afterwards). These actions will be hash-tagged at #JlemNoRacism. If that doesn’t mean anything to you ignore it. In conclusion: there is energy. It is small, but it is something. More to come.