Hey all. I’ll be coming the US for a few weeks, and will be giving a few talks while I am there. If any of you are in Vermont, Boston, Princeton or Philly, come on by.

Nice write up on Middlebury’s website (click on the photo for a link to the full piece). 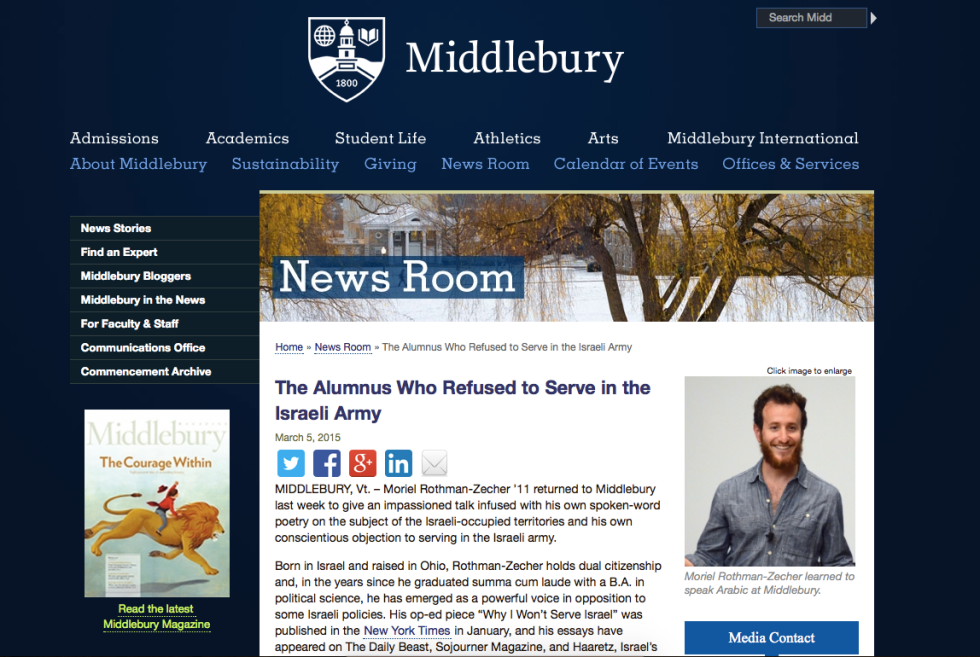 [Two small corrections to the piece: It was settlers, not IDF soldiers, who cut down the grape vines in Halhul; and I am also just a member of All That’s Left (I helped found it- but there are no leaders, as such)].

Some tweets from this event:

.@Moriel_RZ defines occupation: the separation of rights, privileges, and access combined with the violence to maintain it

.@Moriel_RZ: Operation Pillar of Defense was a direct product of the Israeli occupation

.@Moriel_RZ: I no longer believe that internal Israeli politics alone can end the occupation

.@Moriel_RZ: no matter what we think about BDS, we must recognize that it is a nonviolent movement

On March 3, 2015, Princeton University’s Center for Jewish Life – Hillel welcomed activist Moriel Rothman-Zecher to speak in our building. Moriel is fluent in the language of the mainstream American Jewish culture, the language of religious Jews committed to the literacy and traditions of their faith, and the language of those passionate about ending the occupation and confronting all forms of injustice.  Much like his poetry, which seamlessly and creatively incorporates English, Hebrew and Arabic, his powerful and deeply personal message to the Hillel community wove all of these languages together in a beautifully poignant and compelling way.

Moriel is extremely serious about his convictions, as evidenced by his conscientious objection to military service, and yet he conveyed his convictions with warmth, humor and compassion.    He was not confrontational or disrespectful in his remarks, yet still managed to challenge those in the room to question their implicit (and often explicit) biases and fears.   As our community continues to foster an environment of open and civil dialogue, we are grateful to have had the opportunity to experience Moriel’s genuine message of pain and hope.”

”Mori’s talk was sharp and creative, and I left inspired by his commitment to Judaism, activism, and peace. His talk has since propelled our community into important conversations about Israel, Palestine, and the role we play.”

(Cancelled due to weather) 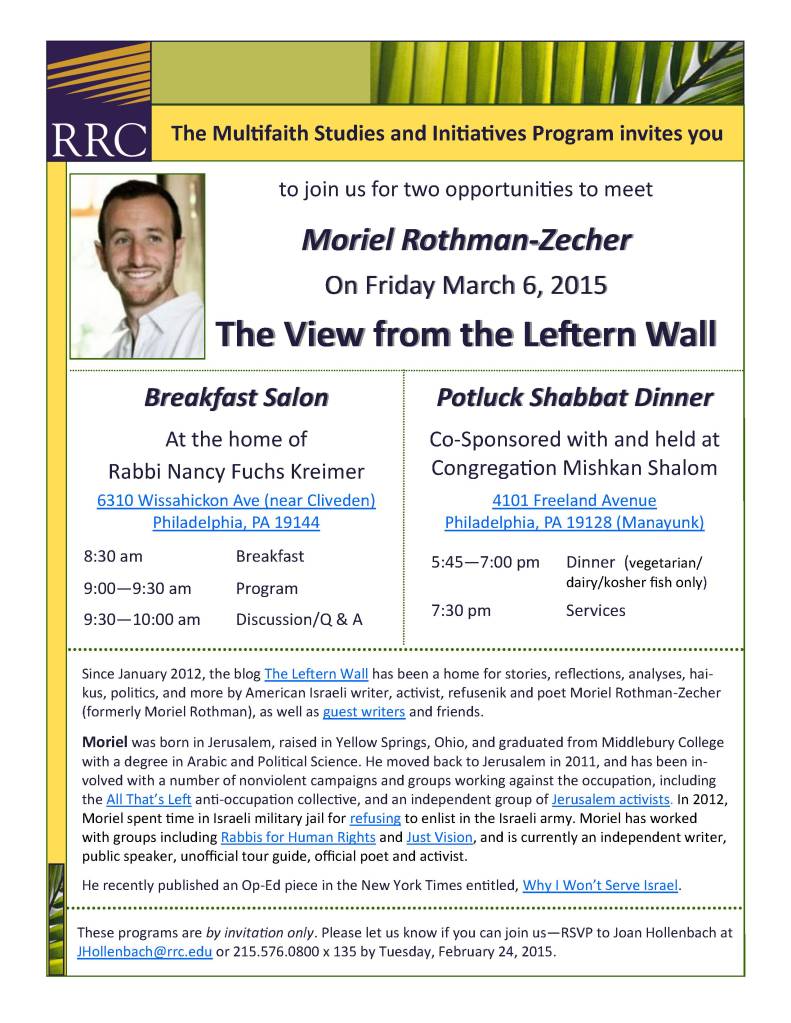 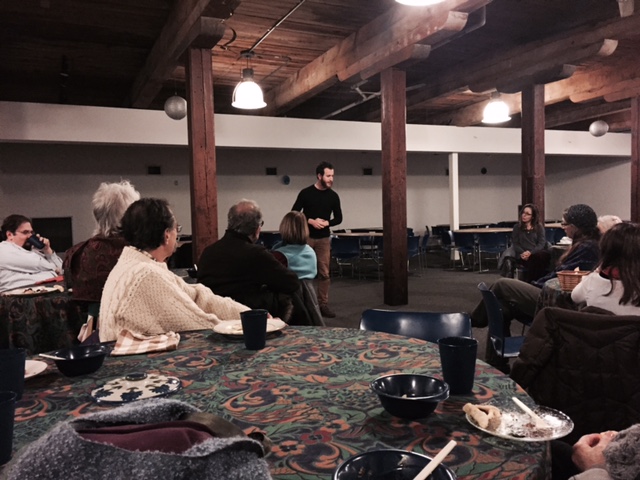 ”Moriel Rothman-Zecher spent four days with us in Philadelphia in March 2015. We only wish it could have been longer! Mori used original poetry, personal storytelling and thoughtful conversation (both speaking and listening) to educate us about the challenges facing Israel and the Jewish people. His diverse audiences left his presentations inspired to continue their learning and activism and blessed by Mori’s wisdom and compassion.”

”Moriel Rothman-Zecher’s appearance was an electric combination of spoken word poetry, political philosophy, and hard-won, humble truths about Israel today and being an anti-occupation activist. His words were an inspiring reminder of the power of Jewish ethics in action, and of the tremendous resources we have in a progressive, compassionate Judaism to create real change.”