I never had the chance to vote, ever, like in any elections, but today I am casting an abstract vote, if you will (as a Palestinian in the Westbank, I have no right to vote in Israel’s elections). Since this election will likely have a greater impact on my life, and my children’s lives, than any other foreseeable election, I’d like the chance to cast a vote, even if it is, practically speaking, without value.

So, without any further ado, I cast this single hypothetical vote for the Joint List! 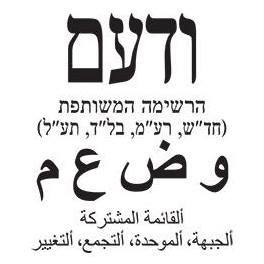 I have mixed feelings about Israeli elections. On the one hand, it is not the grand exercise in democracy that Israeli politicians will lead you to believe it is, because if it truly was that, my vote would not be merely conceptual, it would be every bit as real as the votes of those whose ID cards happen to be more blue. See, every major aspect of my life (mobility, business, work, marriage, children [I am married to a Jerusalemite, and that comes with a few unfortunate complications], security, etc.) is determined by Israeli policy. A good part of my tax shekels trickle down to Israeli coffers in one way or the other.

Yes, I do believe Palestinians should have an independent state, but Kurds believe in an independent state of their own, and they still get to vote in Iraq, Turkey, Syria, and Iran. So, from a fairness standpoint, I should be able to vote, for real.

On the other hand, there is something deeply satisfying in this exercise. Probably, it has to do with the fact that the people, at least Jews and Palestinians in Israel, have the opportunity to serve their politicians, at least those who got a little bit too comfortable in their positions of power, a good ol’ slap in the face. And Israelis, being the fussy and erratic people that they are, never miss a chance to do just that. Such a rare spectacle only comes once in a generation, if not less frequently, in this part of the world, and probably in a much less peaceful manner (think Mubarak, Zain Al-abidin, Qadafi, Saleh, etc). Needless to say, the feeling is especially amplified when it is Netenyahu and Leiberman we are talking about.

I do not know what the outcome of the election will be, but I have a good feeling.

My only regret is that I wasn’t part of all of this.

Who knows, maybe one day.

*The writer is a Palestinian from Ramallah; he can be reached via Facebook.