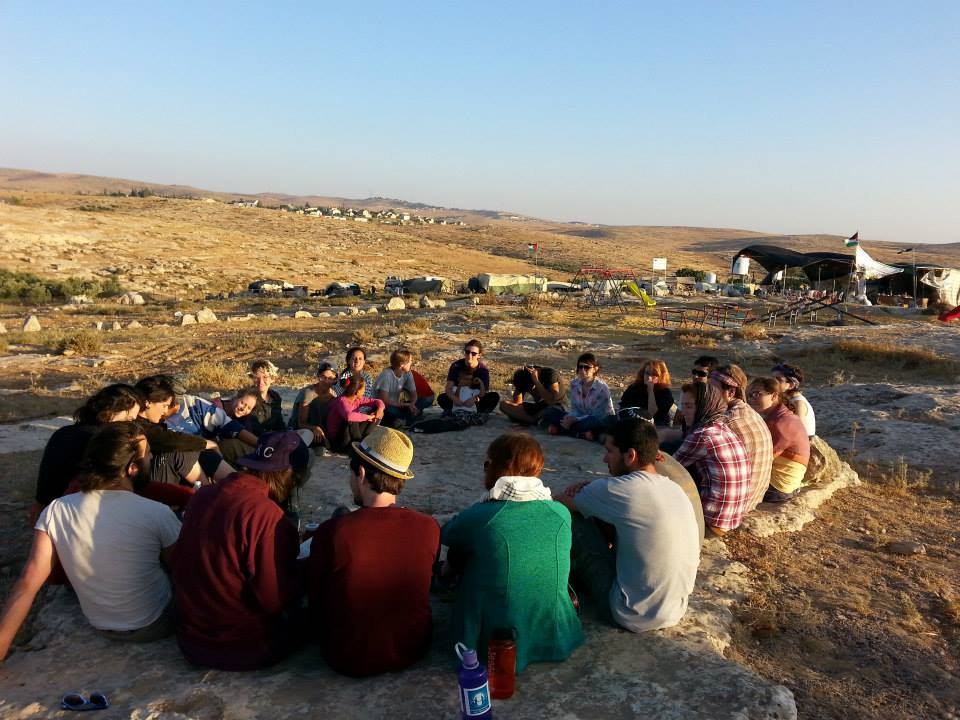 Shabbat in Susiya. Photo by A. Daniel Roth.

That’s the first thing I remember about him from that weekend. He looked lonely, and his nose was very pink from the sun. I went over to talk to him. Mostly, I just wanted to run around with the hilarious, wonderful kids from Susiya — whose homes and community garden and playground were threatened with erasure at the hands of the Israeli government —  and to spend time talking strategy and politics with Nasser Nawaja, a brilliant community organizer from Susiya, and with my comrades from All That’s Left, together with whom I’d helped plan this weekend of action, in which around 100 Jews from the Diaspora and from Israel spent the weekend in Susiya, and worked on a road in Bir al-Eid, and planted thyme in Umm al-Kheir, and fought against the occupation which wants to destroy Susiya and Bir al-Eid and Umm al-Kheir and Palestinian community life in the South Hebron Hills, in general.

Or around 99 Jews, more accurately.

One of them was there, it turns out, in order to help the occupation. To facilitate Susiya’s destruction.

He looked lonely, so I went over to talk to him. He was Israeli, so we spoke in Hebrew. He was sweet, and a bit odd. I don’t remember all of the details of our conversations — he said something about him growing up Haredi, and then leaving that world. He was curious. He asked a lot of questions. I find myself, with the knowledge I now have, wanting to remember a blush creeping over his face as he spoke about his ”growing convictions that the occupation was wrong,” but I don’t actually remember that blush. What I do actually remember his how enthusiastically he helped build the road in Beir al-Eid, breaking rocks with a pickaxe, laughing, sweat pouring down his sunburnt nose. He’s on the far left in the following picture:

I don’t know all of the details. He said his name was Chai Parmed. Maybe it was. Maybe it wasn’t. He also apparently ”volunteered,” for Breaking the Silence, whose video revealing his identity was how we from All That’s Left found out that he actually came to Susiya that weekend not to learn, but to spy. I was nauseated to learn this. We invited him with open arms, to join our activism and learning and the Shabbat service we held on the rocks of Susiya, which was one of the most vulnerable and beautiful moments of activism I’ve ever been a part of. It was especially beautiful because it was done with the blessing of our hosts from Palestinian Susiya, who opened their community to us over that weekend. And, unknowingly, but nauseatingly nonetheless, we brought into their village someone who sought not to fight for it, but to destroy it.

I wonder if he feels ashamed. I wonder if he had any second thoughts during the weekend, when he was served food and drink by the people whose community was threatened with demolition, when they invited him to dance to the crinkly music pouring out of the parked car’s speakers. I wonder if, like a good soldier, he swallowed his second thoughts and silenced his doubts and continued onwards. There were, of course, no “secret tapes” released after that weekend, because there was nothing that happened there that we wouldn’t say in public, out loud, from the rooftops. There was just a bad aftertaste. In the following picture, ”Chai Parmed” is helping hold the banner, in the gray shirt standing just above the letter “i”. He is standing with my partner, and a few of my dear friends, and a few Palestinian residents from Susiya. He is resting his arm on Isaac’s shoulder, as if they are friends.

Ad Kan recently rose to prominence when it succeeded in broadcasting its findings about the gay Mizrahi Israeli Leftist, Ezra Nawi, on Israel’s leading investigative journalism show, without the show, Uvda (Pravda?) bothering to ask basic journalistic questions, as Amira Hass and Haggai Matar both pointed out after the broadcast.

Regarding the actual details of the story about Ezra, which is troubling, and complicated, Mijal Simonet Corech wrote about a beautiful, complex piece that soared past the specifics, and demanded a leftist discourse that transcends Good versus Bad. Read it. (And for those of you who read Hebrew, read it in Hebrew, to get the full poetry of the original).

Now, there is a left-wing activist who is being held in jail, whose name is under gag-order, and who is being denied the right to see a lawyer.

The general anti-Leftist fervor sweeping through both official Israel and the grassroots is not so complicated.

It’s scary, but not that complicated. At the start of 2016, the Israeli reality is one of basically permanent occupation, and if the occupation is basically permanent, than the situation cannot be legitimately called anything but a form of apartheid, in which two groups living in the same territory are given radically different rights, and in which the regime will go to great ends to stifle dissent and quash resistance. And in that way, 2016 isn’t so different than 2010, or 2006, 0r 2001, or 1989.

There is still no comparison to be made between the way that we on the Jewish Israeli left are currently being hounded, and the extreme and ongoing oppression the entire Palestinian people faces at the hands of the Israeli government (although the gag-ordered and lawyer-banned arrest of “the left-wing activist” is a tactic straight from the long, long book of Occupation that has been etched into the soul of the State, has in many ways become the soul of the State).

This is the essence of the debate: Is it right to destroy Susiya, or is it wrong to do so.