1. The demonstration was both enormous (comparatively) and truly a joint struggle, with around 350 Israelis, along with international supporters, organized by a broad coalition of Leftist Israeli groups, coming on six buses from Tel Aviv and Jerusalem, and a similar amount of Palestinians from Susiya itself, as well as from other parts of the West Bank, including activists from Beit Umar, Bethlehem, Beit Jala, East Jerusalem and the much renowned Palestinian nonviolent activist from Bil’in, Abdallah Abu Rahmeh.

2. The demonstration itself was led in a manner that was both dignified and entirely non-violent, but also extremely determined and powerful, with Palestinian women and girls taking a large part in organizing the chants and leading the march towards historical Susiya.

3. The march was, of course, cut short by Israeli army and border police, who shot tear gas and threw stun grenades at the 100% peaceful protesters. 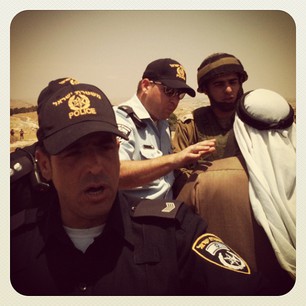 4. One Israeli protester- a pacifist who recently refused to serve in the IDF- was hit in the head, either by the tear gas canister itself or by a rock that bounced up as a result of the tear gas canister being shot near him. He is being treated in a hospital in Jerusalem, and is not in any serious danger.

5. Despite the army’s initial round of violence, the demonstration remained calm and entirely peaceful, no demonstrators were arrested (which is not to be taken for granted at a protest of 600-700 people) and there was something dignified -and perhaps even joyous- in the air, not because we had forgotten the gravity of the situation (the orders to demolish Susiya still remain, and the struggle is just beginning), but because there was something so refreshing about such a large group of people marching together for justice, for equality, for a shared future. This atmosphere was boosted by the Israeli drummers, Yassamba, by the groups of brave Palestinian girls leading chants (my favorite was “1, 2, 3, 4, Occupation No More! 4, 5, 6, 7…” and then a burst of laughter and clapping, because the slogan itself was not what mattered, but rather the act of raising voices together), and, of course, the Army of Clowns:

6. The lack of symmetry- a theme that arises again and again in discussions of the occupation, of oppression, of Susiya- was illustrated perfectly by this demonstration, which was entirely peaceful, and the army’s response, which could have been more violent, but was certainly not gentle. 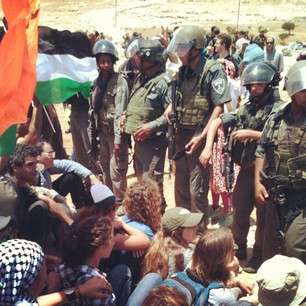 7. The Israeli “Skunk” water cannon (which thankfully was not fired) was just so glaringly phallic. IDF MORE MANLY THAN ANYONE SHPLAARGH. 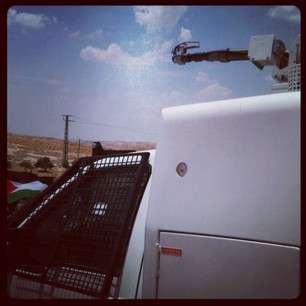 8. This picture was taken by a friend, Noam, “to be sent to Anastasia and Uri,” in reference to two Israeli MKs who made anti-queer, homophobic comments last week. It is also a fun riff off of the IDF’s staged picture two weeks ago in an effort to prove how gay friendly the IDF is (known by many as “pinkwashing” the army’s policies vis-a-vis Palestinians). 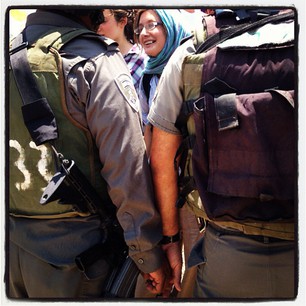 9. This struggle is just beginning. A lot more will need to be done to stop the demolition of Susiya. Help will be needed from abroad as well, and we are already thinking of the best way to encourage such connection, starting as early as next week. Meanwhile, what everyone can do is SPREAD THE WORD. Israel plans to demolish Susiya. Susiya must not be demolished. 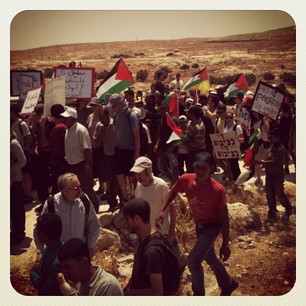 10. A small moment of light: I was very proud today to be part of this demonstration, part of this struggle, and part of the Israeli Left. May today’s efforts bring renewed energy, renewed unity, renewed cooperation, renewed determination, and perhaps, perhaps, together with the people of Susiya, other Palestinian and international activists, we will be able to contribute a bit to stopping the injustice our government plans to enact.