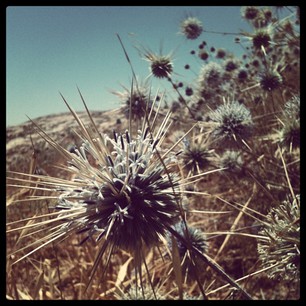 This morning, I ventured out to the village of al-Mufaqara in the South Hebron Hills. I went with four members of Ta’ayush, an Israeli organization that challenges the Occupation by helping Palestinian farmers access and work their land (they usually go out on Saturdays, so I don’t go with them, but am a big fan of their work and was excited to have this opportunity to go on a non-Shabbat). Our intent was to help the folks in al-Mufaqara fix a dirt road for a few hours, and then to go meet up with a tour in Susiya, right near by, led by the Solidarity Movement. We did both, but were “delayed” for a bit, between steps one and two… (Explanation forthcoming. Below is a picture of a few of the 20 soldiers who came. Backup!!! That is to say: Boredom). 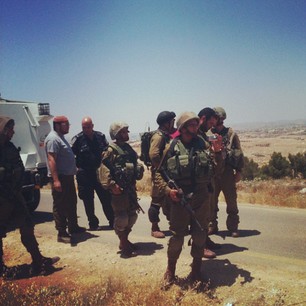 Also with us in al-Mufaqara were a few lovely and friendly Italian volunteers from Operation Dove, a group that does peace and nonviolence work in various locales throughout the world, and in Palestine is based in al-Twane. These activists in particular, and their group in general, struck/strike me as the exact opposite of the sort of international activists I wrote critically of last week, humble, loving, nonviolent, dedicated (one of the volunteers, who told me she plans to stay for two and a half years, inshallah, spoke excellent Arabic). Together with these two, and a maybe twenty young boys from the village, ages 5 through 20something, and a few older men from the village, we began shoveling dirt into buckets and loading the buckets onto a truck. My little writer’s hands started cracking immediately, and I could only laugh at the fact that the seven year-old Palestinians were shoveling much more efficiently than I was. We were there, of course, primarily in solidarity and as a sort of “protection” (if Israelis and internationals are present, chances of violence from settlers or the army are decreased).

Work goes great, as far as work goes, and then, as we are heading to a different part of the village, the kids see soliders, and start chanting:

Huh? Laughing, I clap along. And then I get it:

Brilliant. Tamar, another one of the activists there, made a supersharp lingual observation that may translate only mediocre to English: The two words have the same root in Arabic.

Arabic, like Hebrew, is structured around three-letter roots (ie. ش ر ب sh-r-b, the root for drink, then transforms into أشرب (ashrab, I drink) or مسروب (mshrub, a beverage)). Obviously, neither the word Occupation or HaKibush have real roots in Arabic, but if they were to have roots, they would be basically the same: اكوباشون نو مور ikubashunomore, اكبوش نو مور ikibushnomore. Giddy and language-high, I noticed that one of the smallest boys was wearing a Spiderman shirt. Spiderman in Arabic is رجل العنكبوت, rajl al-Ankabut (man of Spider). I got the attention of the kids, and added a third chant to our repertoire:

Laughing and clapping, no more spider, no more ikubation, no more akibush, we ran towards the soldiers, and a thought skipped through my head: For all they know, we are chanting Death to the Jews. And then: How much better would everything be if Israeli Jews learned Arabic, starting in elementary school? I think a lot.

The soldiers who came into the village this time were relatively friendly, but there was still the familiar ache: what are these kids doing here/what right do they have to swing their enormous guns into this village/didn’t colonialism go out of vogue in like the ’60s?

They left, we resumed work, now a joint project of putting the dust and rocks gathered earlier in strategic places to make the dirt road less bumpy and of rolling tires painted the color of Palestinian flags into artistic locations along the side of the road (I am not a fan of national symbols of any sorts, especially not flags, but there was something very sweet and simple about this tire-art, and something brave, as this tiny village (collection of huts, really) is surrounded by two fairly extreme settlements, Havat Maon and Avigail. 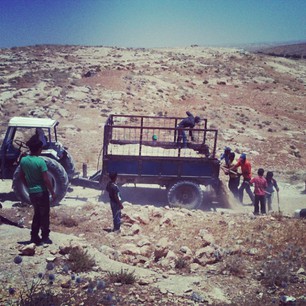 As we were finishing up the redusting, a few settlers from the aforementioned ‘ments pulled up in their cars and began filming and taking pictures of the Palestinians putting the colorful tires in place. In a presumably-unconscious display of the mentality that enables one to comfortably be a settler, a female settler asked, not unkindly, the Israeli activists not to film her car. Why? Because her kids were in there.

This, as her husband had stopped the car to film Palestinian kids.

The day was slow, thick. Everyone seemed a bit bored, and the tension felt buried under layers of sun-induced lethargy. We said our goodbyes to the folks of al-Mufaqara, got in our car, and scooted past the settler, who was still filmed on our way to Susiya. As we made our way down the road, we were stopped by a police officer.

“Turn your car around and follow me. You’re detained.”

He didn’t answer, and gestured for us to follow him. We do so, chuckling and clukcing our tongues, past al-Mufaqara and to the settlement of Avigail. There we are met by literally 20 soldiers and policemen, and a number of settlers to boot (one of whom said to the Palestinians, in classic Jim Crow White Man Fashion, that there would be “no problems” between the Palestinians and the settlers if it weren’t for these “troublemakers” from the North- I mean, from Tel Aviv). We tried to figure out what we were detained for- was it the dusting? Or the Colorful Tire rolling? Or, no, no, let me guess, was it the chanting against spiders? Have you all managed to get Spiderman on your side?

And then, cresting the hill, we see it: a group of young Palestinians marching towards us, clapping and shouting slogans. What sort of violent act are they chanting about now? The words become clearer as the ground approaches:

Smiling, the kids from al-Mufaqara say hi to us, nice to see you all again, and tell us that one of the settlers who stayed, after we left, had taken one of their tires. So, they came to ask for it back. We stood there, laughing, filming the settlers filming the Palestinians filming us filming them metaburst filming, chanting for the tire and asking periodically if we were still detained until the answer was finally, no, get out of here. 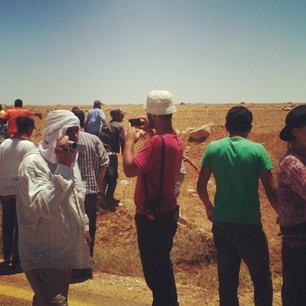 We finally made our way to Susiya, where I noticed a line from a Mahmoud Darwish poem scrawled on one of the tents: 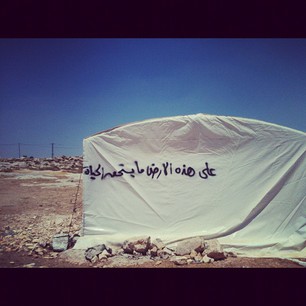 The line translates roughly, to: “On this Land there is that which deserves life.” It felt really fitting for this day that felt so filled with life, despite.

And then, as we were getting ready to leave Susiya, we got a call from al-Mufaqara:

They got their tire back.