Recently, I went for a run (which is something I do a lot, as I am training for another ultramarathon). While running, I listened to a podcast (which is also something I do a lot). I don’t remember if it was This American Life, the Moth, Snap Judgement, or Death, Sex & Money, but I do remember that I was listening to a story. Which is what I most enjoy listening to, stories, and why the podcasts I just listed are primarily story-oriented podcasts. I will listen to a story over anything else -political analysis, news, etc.- nine times out of ten. And the same ratio applies to my reading, novels + narrative nonfiction + excellent history (which is really just excellent storytelling) versus Everything Else.

As the podcast wound down, and I kept running, I found myself thinking back to various pieces I’d written on this blob and elsewhere over the past three years. I’ve written a lot (this is my 246th post on the Leftern Wall since January, 2012), and I believe that some of what I’ve written has been very good, a lot of it has been decent, and some of it has been mediocre/The World Could’ve Done Without. And then it struck me: I’ve had a few good analyses here and there, like my piece on why Israel is Not a Jewish State and a recent one on the Brilliance of Decollectivization, and a handful of prescriptive political polemics that I’ve believe can have some impact, like 10 Reasons Never to Visit the City of David, and Why Not Join Ein Prat, but the pieces that I am most attached to, and -not astonishingly, as the reader can generally feel how much the writer cares about what s/he is writing- audiences and readers have responded to the best have been stories.

Sometimes they are simple stories from the day to day, like Being Kicked out of a Double-Settler’s Car in the Middle of the West Bank, or the less day-to-day, like Being Denied a Request for a Conscience Committee. Sometimes they are stories about other people, like the story of Suhaib, a 14-year old Palestinian I met who had gone through horrific ordeals in Israeli jail, or like the Shamasneh family in Sheikh Jarrah, who faced their own ongoing Nakba last year. Sometimes they are drawn from direct activism, like the story of Being Arrested in Hebron from Studying Torah or from the results of direct activism, like the story of Being Rammed by a Man in an Electronic Wheelchair Fundraising for 10 Needy Holocaust Survivors (and his response!), and so on. I love telling stories! And hearing stories! So much meaning, beauty, ecstasy, understanding, death-consciousness, truth-seeking, oddness, humanity packed into these little collections of words that form a retelling.

So: here’s the idea behind The Leftern Wall July Story Journal: I am publicly committing to trying to tell or post one story every day. I don’t yet know what form they will take- maybe I will interview people, maybe I will play around with audio or video, maybe they will just be a story about my building or the supermarket. I also want to invite you -friends and readers- to contribute stories! Write them, or suggest them, or we can co-write them: all is open, no strict guidelines, and although the general area of politics and praxis is the focus here, both politics and praxis are wide, wide concepts.

Alright! Enough framing. Grab a coffee (and an insanely good croissant I had the other week with my friend), and here we go. 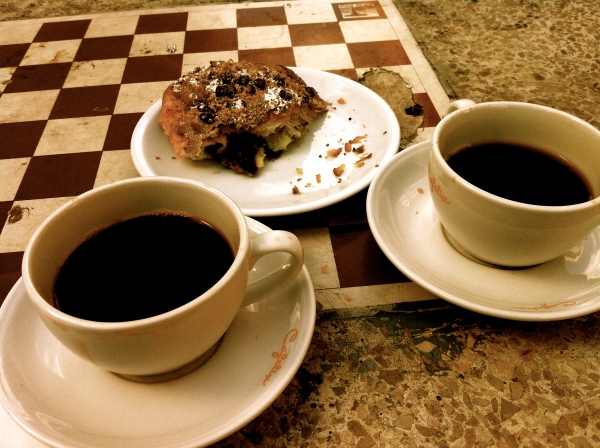