At Ein Prat, which has both pre- and post-Army programs, young Jews from all different backgrounds, American and Israeli, secular and observant, liberal and conservative, come together to study canonical texts, both Jewish and Western. Nestled among rolling hills, these youngsters gather to “forge a new paradigm for Israel,” and in their spare time, some of them take part in a fun and funky Jewish music group called The Fountainheads.

Where does such a place exist? For some odd reason, Ein Prat’s location is not listed anywhere on its English-language website.

Ein Prat’s programs, which attract many liberal-leaning American Jews, are located in Kfar Adumim and Alon. Kfar Adumim is a settlement, as is its satellite settlement Alon. Anyone who chooses to study at Ein Prat chooses to directly benefit from and support the continued military occupation of over two million Palestinians.

To be clear: the people of Ein Prat, its faculty and students, could very well be -and indeed probably are- thoughtful, complex and kind people. I assume the same about most settlers, and most people. My criticism is not leveled at the character of the individuals of Ein Prat (many of whom I know personally), but rather at the system which Ein Prat necessitates just as much as do more explicitly ideological settlements like Yitzhar (home to Torat HaMelekh and active groups of “hilltop youth”). Indeed, without checkpoints, roadblocks and the denial of an entire people the right to vote for the regime that controls both their day-to-day life and their destiny, neither Ein Prat or Yitzhar could be where they are.

Of course, the students of Ein Prat would never go and beat up Palestinian children. In fact, Ein Prat probably encourages dialogue with Palestinians. And yet, the violence enacted by both places is, at its root, disturbingly similar: a systematic, structural violence. 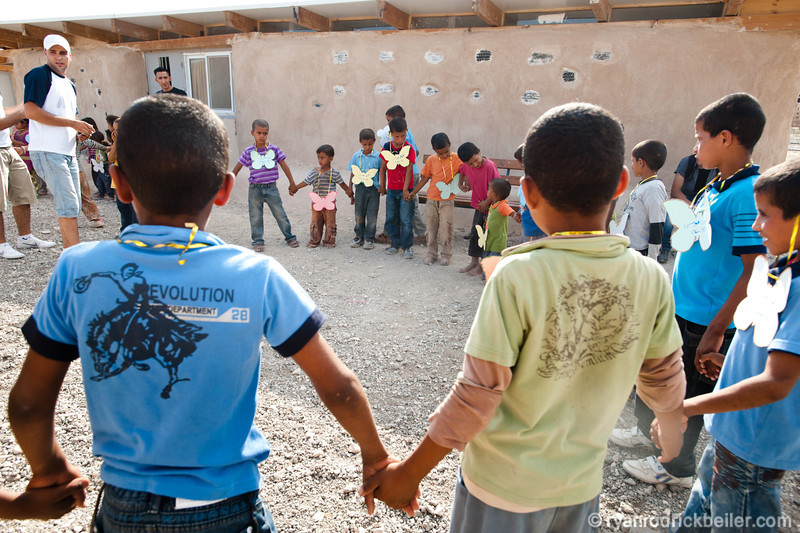 Ein Prat students grapple with a whole range of issues, but do they grapple with the issues going on right around them?

Near Kfar Adumim and Alon is a small village called Khan al-Ahmar. Khan al-Ahmar’s residents are Bedouin refugees who fled their homes in the Negev in 1948 and their descendents. Khan al-Ahmar, like many Palestinian villages in the Israeli-controlled parts of the West Bank, known as Area C, does not receive basic services including electricity and water. Up until recently, Khan al-Ahmar also did not have a school. To get to school, the children of Khan al-Ahmar had to walk a route that was both long and dangerous, and a number of them were killed crossing the highway.

In 2009, Israelis and internationals helped the residents of Khan al-Ahmar build a school out of tires and mud. Khan al-Ahmar, like other Bedouin communities, was not included in “master plans” following Israel’s occupation of the West Bank in 1967, and thus is not allowed to even apply for construction permits. The school was built without an Israeli permit, and with the hope that Israeli policymakers could find in their hearts enough mercy to allow this school- a symbol of dignity, learning and cooperation- to stand.

This hope was in vain. Even before the school was finished, the Civil Administration issued orders to demolish the school. The demolition was not carried out immediately, thanks to legal efforts and the pressure from various NGOs, including Rabbis for Human Rights (with whom I have been active over the past year, although the views represented in this article are mine and should need be taken as necessarily connected to the organization), individual activists and embassies, and the processes remain frozen today.

And then: this past August, Kfar Adumim, along with its satellite settlements Alon and Nofei Prat (Ein Prat’s hosts and homes), filed a petition that sought, according to Haaretz, to require the IDF and the Civil Administration to “explain why the school had not already been demolished,” and to chastise the law enforcement authorities for failing to prevent the residents from planting trees around the school and installing playground equipment. [Update: the Civil Administration has verbally committed to maintaining the freeze on demolition of the school, despite pressure from Kfar Adumim, et al, and Regavim, the sinister settler group currently pushing for Susiya’s demolition. Such a commitment, however, could change at any point].

Why on earth would Kfar Adumim, et al. put such effort into making sure that a Bedouin elementary school is demolished?

Because that is how occupation works. The elementary school in Khan al-Ahmar does not pose a “security threat.” The demolition is planned because the school is a symbol of permanence and of dignity. And Palestinian permanence and dignity are anathemas to the occupation.

Kfar Adumim’s petition merely comes to ensure that the occupation functions at full force. And the occupation must function at full force so that the residents of Kfar Adumim and Alon and Nofei Prat can continue to have cheaper housing or a more biblical backyard or both, and so that Ein Prat can continue to flourish as a moderate, pluralistic place of study in a beautiful desert locale, to which Jewish kids from all around the world can come to open their minds and their hearts, to make catchy, creative music clips, and to “create a new paradigm for Israel.”

It is sometimes necessary to lay things out bluntly and simply: When one chooses to learn at Ein Prat, they are casting their ballot for the occupation to continue, at least for the time period in which they are there. They are giving their implicit support to the daily humiliation the occupation brings upon on millions of non-Jews. They are loaning their name to Kfar Adumim/Alon/Nofei Prat’s petition to demolish the elementary school in Khan al-Ahmar. And they are quickening the pace at which all of the Bedouins in the Kfar Adumim area will be transferred out of their homes and villages.

My ask, then, is also quite simple: if you wouldn’t take a hammer to the tire-and-mud walls of the school built by the children of Khan al-Ahmar, then don’t go learn at Ein Prat’s settlement programs. Period.