On January 30th, 2012, I started this auspicious blob under the completely nonsensical and dumb name of “Of the Strong Eccentric.” I wanted to concentrate my writings, poems, creations and thoughts in one place, generally focused around my opposition to the occupation, but also broadly connected to ideas of justice, nonviolence and love from a Leftist perspective, starting with the 25-minute documentary I made based on interviews with Palestinian Citizens of Israel, “Identities of Contradiction:”

I tentatively began trying my hand in the world of independent blogging (having previously been writing for outlets like the Huffington Post, +972 Magazine and Common Ground News Letter wherein if I wrote something really dumb, they’d be like, hey, that’s really dumb, and not publish it), and quickly found the tone I was looking for– informal, highly political, personal, humorous, outraged, confused, hopeful. Soon after, the name The Leftern Wall came to me as I was going to sleep one night, as a follow up from a joke about a wall in my brother’s and my Jerusalem house covered in maps of the Occupied Territories and flyers advertising various protests. I didn’t quite realize then what an important part of my life this blob (for the record: I don’t mean anything by the word blob, blob is not a different type of blog, it is just a reference to the fact that my dear friend’s grandpa once told him that he thought the blog my friend and I were then working on was one of the “finest blobs he’d ever seen”) was to become.

Over the past year, I have posted 166 posts (this will be my 167th). I have written about activism and injustice in the East Jerusalem village of Silwan and the West Bank village of Susiya, about the JNF and about Ein Prat, about things I really like about living in Israel and getting thrown out of a settler’s car and Non-Zionism and Two-States verus One. I have written poems about flags and spit poems about Jerusalem:

I have been called a Gay Nazi and co-authored ruminations on love and justice with a dear friend and fellow writer who was walking across America. And, most recently, this blog accompanied me through my most recent and intense journey into and out of Israeli military jail for refusing to enlist in the IDF (including a number of guest posts while I was in jail by my brilliant younger brother Jesse).

So, not much to conclude: I plan to keep blobbing, albeit probably at a less furious pace for the near future (sneak preview: I think I am writing a book (eep) on the subject of refusal, love, nonviolence and the occupation, through the lens of my recent experiences, many of which were first filtered to the public and into writing through this here blob). Thank you all so much for reading, for your feedback, your critiques and your words. Well, most of them, anyway ;) 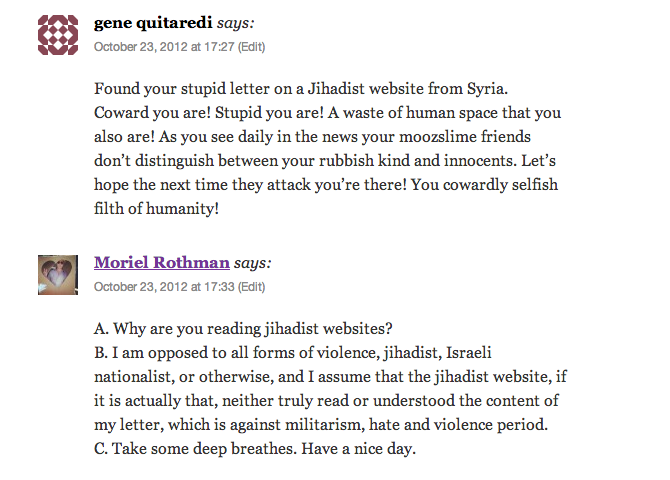