#Balloons are more than just toys. #IDF soldiers use them to stop #terrorist activity on #Gaza border https://t.co/2z1VKhs3na

I watched the video, which, in and of itself, seemed pretty tame. The part that struck me was not the video’s content, but the subtitles. In watching it the first time, sort of absentmindedly, I noticed some oddities in the translation, specifically around the word “terrorist.” I went back and watched it again, and was sort of stunned by what I noticed.

At the beginning, the soldier says: ”איום של חדירה”, which means, in this context, “the threat of infiltration.” 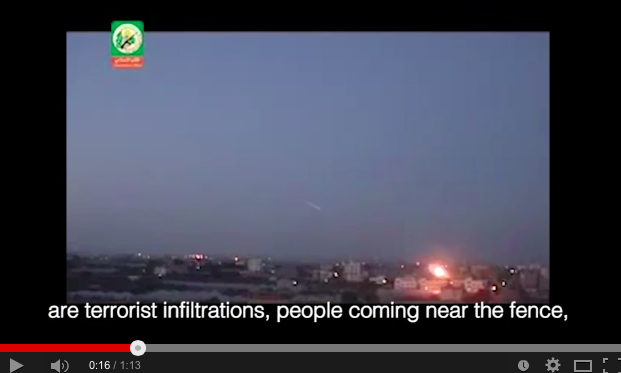 Fine, maybe they’re just taking a bit of creative license, or trying to extrapolate on what the solider says later. Then, at second 0:24, the soldier says: פעילות מסוימת שהיא לא שגרתית. Which means: “Certain unconventional activities.”
The video translates it as:

Then again. Second 0:41.The soldier says: ”בשביל לאתר חוליית משגרים” which means: “In order to locate a squad of rocket launchers.” The video’s translation? 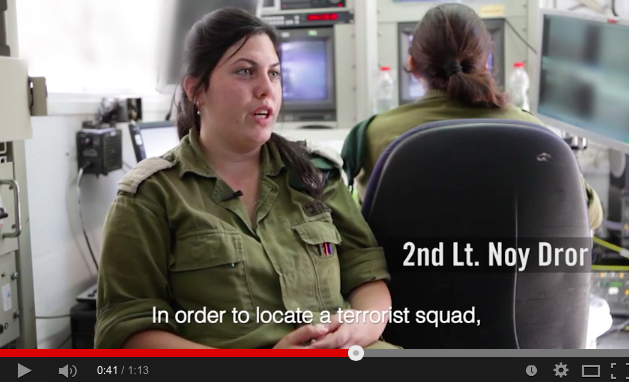 And then a fourth time, at second 0:59: רואים את הבן אדם עצמו מחזיק את הרקטה עצמה׳׳”which means: “We see the person himself holding the rocket.” And: 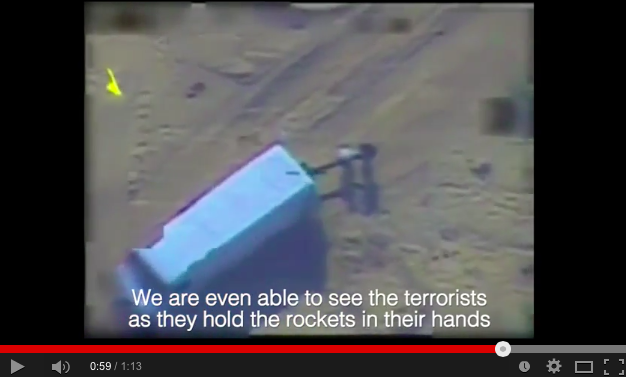 This is not an accident, nor is it just semantic nitpicking. Words shape reality, and the perception of reality. The reality that the IDF wants people to believe is a simplistic one of Israel versus Terrorists. But the soldiers in this video themselves didn’t use the word once. Regardless, the IDF Spokesperson added it four times into the translation. Who is going to notice, and even if they do notice, who cares? We should.
This connects, for me, to two other semantic notes.

In 2009, we had עופרת יצוקה. Translated accurately, it was called “Cast Lead” in English.
But then there was Goldstone, and world criticism. Cast Lead sounds violent, damaging, warlike. This doesn’t disturb the populace in Israel, which, from a place of genuine fear, mostly, responds well to a sense that we are “hitting them hard.” But “Cast Lead” might not sound so good to an unprecedentedly critical world. So in 2012, we had עמוד ענן, which translates literally to: “Pillar of Cloud.” Pillar of Cloud seems like a fairly neutral name, but it might give the connotation, to an outside audience who doesn’t catch the Biblical Reference (Cast Lead was also a Hannukah reference), of houses on fire, and pillars of smoke. Or maybe not. But lest the IDF Spokesperson take a chance, it was mistranslated into English as: “Operation Pillar of Defense.” Continuing from the lesson learned in 2012 (and here I acknowledge that I might be wrong, that two times in a row is not enough to conclusively prove a pattern, so this should just be seen as a linguistic and political hypothesis), this past summer’s “Operation” was dubbed צוק איתן, which would translation literally as something like “Strong Cliff” or “Powerful Edge” or something like that. In English, of course, it was called “Protective Edge.”

2. There is no such thing as “Palestinian resistance to the Occupation.”

This one came up in a recent conversation when I was asked by a friend from America how the Israeli mainstream reacts to differences between Palestinians’ violent and nonviolent resistance to the occupation. I thought for a moment, and then I realized something: They don’t. Why? Because they don’t recognize the existence of “resistance” at all. The Hebrew phrase for “resistance to occupation” would be התנגדות לכיבוש. That is a phrase that almost never appears in mainstream discourse. In fact, I did a google search to see some recent results, and what I found was a number of left-wing Facebook posts, a few leftist bloggers and journalists, and a piece from the mainstream Ynet… Quoting Hosni Mubarak. (And a Wikipedia article about Poland under German Occupation during WWII).

To recognize something as resistance, there has to be a recognition of the thing that they are resisting against, ie., the occupation (Peter Beinart’s piece explaining, this past summer, to mainstream audiences that Gaza is still occupied was thus so crucial). Israeli mainstream media and political discourse are virtually incapable of grappling with the idea that Palestinians in Gaza or East Jerusalem or Bilin might see themselves as resisting the occupation when they shoot rockets, throw stones or march peacefully. At best, these events are framed as עימותים, “clashes” or part of the סכסוך, “conflict.” Usually, they’re just portrayed as hatred-fueled terrorist attacks, whether violent or nonviolent.
***
A final note here: As someone deeply committed to nonviolence, and who abhors the use of violence in any context, be it Palestinian or Israeli, I think that the inability to (1) recognize that there is such a thing as Palestinian resistance to the occupation and (2) distinguish between nonviolent and violent resistance, and encourage the former while opposing the latter, is dangerous and damaging to all of our futures. I also think that we need to be consistent with our categorization of violence. Either it is legitimate, or it isn’t. One cannot say, in good faith, that Palestinians should use nonviolence and only nonviolence while simultaneously supporting the IDF in its Operations against Gaza or the Jerusalem Police’s treatment of young children in Issawiya and Silwan. Today is MLK Day. I will conclude this piece, then, by quoting, at length, some of James Baldwin’s reflections on Malcolm X.

“In the United States, violence and heroism have been made synonymous except when it comes to blacks, and the only way to defeat Malcolm [X’s] point [that the “cry of ‘violence’ is raised only when black men indicate that they will fight for their rights] is to concede it and then ask oneself why this is so. Malcolm’s statement is not answered by references to the triumphs of the N.A.A.C.P… Neither is it answered by references to the student sit-in movement, if only because not all Negroes are students and not all of them live in the South. I, in any case, certainly refuse to be put in the position of denying the truth of Malcolm’s statements simply because I disagree with his conclusions, or in order to pacify the liberal conscience. Things are as bad as the Muslims say they are- in fact, they are worse, and the Muslims do not help matters- but there is no reason that black men should be expected to be more patient, more forbearing, more farseeing than whites; indeed, quite the contrary. The real reason that non-violence is considered to be a virtue in Negroes— I am not speaking now of its racial value, another matter altogether— is that white men do not want their lives, their self-image, or their property threatened. One wishes they would say so more often.” (The Fire Next Time, pp. 58-59).

Malcolm X and MLK were not polar opposites: in fact, their critiques of America’s selective legitimation of violence were quite similar. Malcolm X said that if American discourse sees “the right to bear arms” as holy, then Black people should have that right as well. MLK said that if someone were to call on American Blacks to fight for their rights nonviolently, they must also oppose the Vietnam War and the US Government, which King called in 1967 “the greatest purveyor of violence in the world today.” Relevant. Resonant. Food for thought.
***
[This post was crossposted on Jewschool].