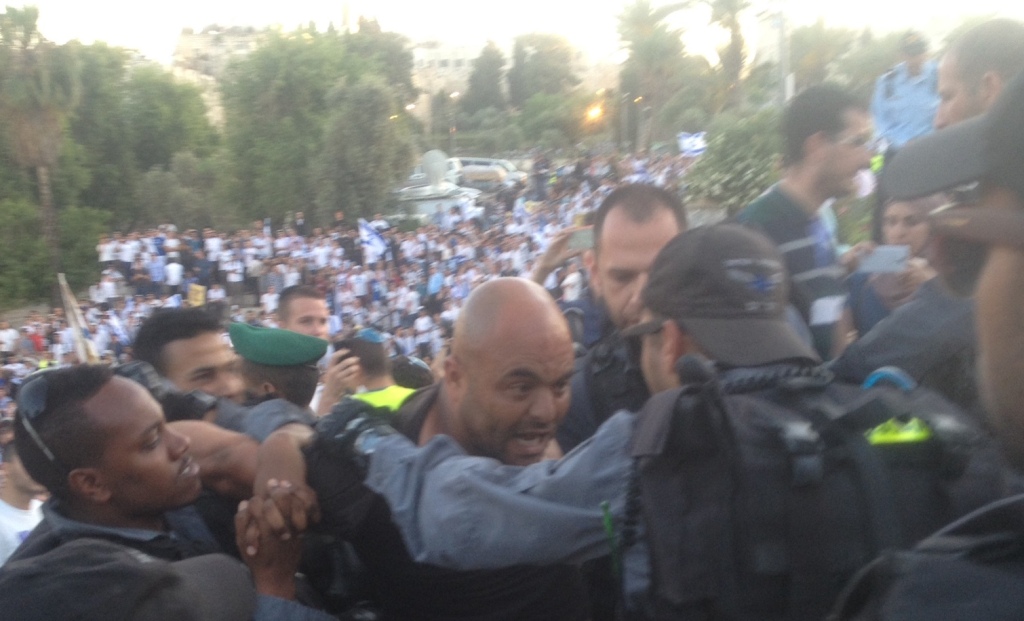 Only after arriving in jerusalem today did he begin to ask himself: did I really want to come to Jerusalem today?

The conundrum of this place (&perhaps of the world) is this: most ppl who take part in oppressive events & systems R decent well-meaning ppl

Like, this dude is prob thinking: "how's my daughter I would like some ice cream" as he makes his way to scary march pic.twitter.com/qyUfWuOgqy

Not scary for him, though, and only scary for me if I choose to "out myself" as left. Scary for Palestinians. Really scary.

Here are the chants: "Kahana Lives!" Vs "Racism should be outlawed." #JerusalemDay pic.twitter.com/3A7KlPOvFr

VIDEO: this is what the scene looks like (note dude at left go: "they're not even fucking Jews dude") pic.twitter.com/WhPqdvc992

"We want a Jerusalem without racism." pic.twitter.com/YT00qe3hkQ

The route down to the Damascus gate is empty, but I can hear the shouts from down below pic.twitter.com/YqWV372WuS

Here, at the Damascus gate, things feel weird, quiet, tense. I ask a guy- what are you doing? He says- waiting. pic.twitter.com/wpqJharIl9

Mounted police have returned from chasing Palestinian protesters back into the streets away from the old city pic.twitter.com/4OuzEmkuhD

Right now: Main march descends on Damascus Gate, tension rises. Palpable. There is a sort of frenzy to the tone. pic.twitter.com/UxwTqCA0zH

noise rises from crowd falling upon Palestinian journalists. man next to me knows their names, is worried. pic.twitter.com/n7g7zZGWwX

VIDEO: "a Jew is a [good] soul, an Arab is a son of a bitch." #jerusalemday pic.twitter.com/qEYEc16Xsi

And then my phone died. What happened afterwards was the scariest part of the day. The group of young Israeli marchers continued with these chants, and began to surge up towards the barrier, where Israeli police officers were separating them from the Palestinian photographers on the other side of the barrier. The Jerusalem Day marchers began throwing things at the Palestinian photographers, first just plastic water bottles, and then wooden flag poles, and then broken pieces of wooden flag poles. It felt like it was tottering on the brink. From what I saw, no one was severely hurt, but it was frightening (You can see video of this moment on Robby Berman’s Facebook page, and a friend noted that you can see me (looking befuddled and confused) at minute 2:26).

I understand the temptation that many have to write this off as a group of rowdy, obnoxious kids. But the essence of the matter is this: This is how the Jerusalem Day marches have looked every year that I’ve attended (2012, 2013, 2014 and yesterday). And yet the Israeli government still grants the marches permits to through the middle of Palestinian East Jerusalem, rather than finding a simple, alternative route to the Kotel. These kids are not the problem. They are swept up in an awful system, and it’s not hard to understand where they are coming from, even as I am crushed by their actions.

The problem is that the Jerusalem Day marcher’s declaration of exclusive Jewish ownership of Jerusalem is in line with the Israeli government’s vision for our city.

May it never be so.

I’ll end with a poem that I originally wrote in the lead up to Jerusalem Day 2012: