There is nothing new about today’s violence. Just that it took place next to my favorite banana stand in the shuk. Near what I think is the fourth best falafel place in West Jerusalem. Stabbing, they say. With scissors, they say. 27 year-old man, then say, and an 80 year-old. Two women, they say. One shot dead. Really young.

I know what Kayla, my partner, would say. She grew up in Jerusalem, during the Time When Buses and Cafes Might Be Blown to Pieces.

This is probably how she’d help me calm down. But we haven’t talked yet today. She’s in Tel Aviv, so all good, there. I WhatsApped our family WhatsApp group, so I’m good. I have nothing new to say. And I know she’s right. I know that’s probably the only way to keep sane in this bloodplace. But I still can’t help but.

Every morning, I wake up around 6:00AM. I usually finish writing around 10:00AM. Then I’ll read the news for a bit, have another cup of coffee. Maybe go to the shuk, for some groceries, around 11:00. Yesterday, I got these bananas there. They’re still not ripe. 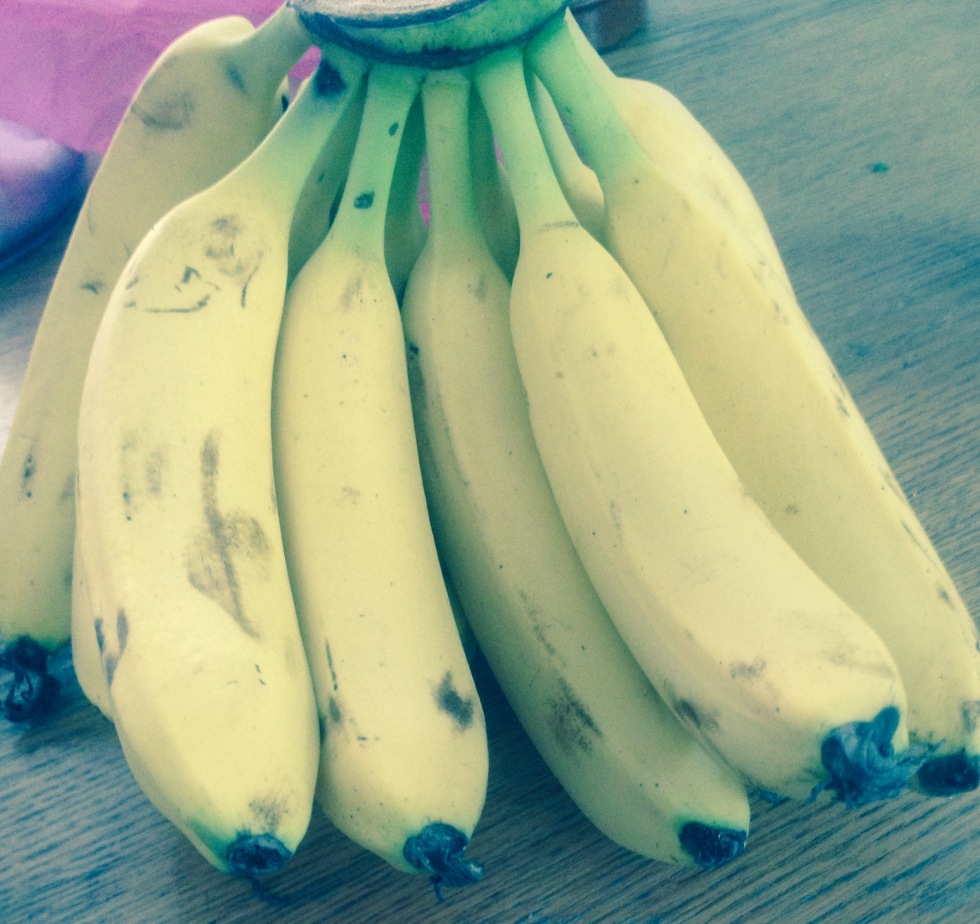 Perhaps the attackers were two young people who were convinced by others or convinced themselves that this was the way to liberation. Or were taking revenge. Or maybe wanted to die, or to kill, for reasons, because of. Or were just confused. They were apparently really, really young. I don’t know if there was a way to stop them without killing one of them. I do not that other cases here have indicated that doing so – avoiding killing – is a non-priority. It’s feels awful. It all does. I don’t know. I know the Political Headlines. I know the Sociological Explanations. They just start to feel hollow, echoey at some point. How often can you repeat the same thing? Things.

There are so many people dying and being killed here. I know. Not so many, compared to some places, but so many compared to how it should be. A young girl, Hadar Buchris, killed in the Gush Etzion junction, who might have been a friend of mine, if we’d met. She also majored in theatre in high school. Or the 24 people killed in the Hebron district, who might have offered me coffee, might have noted that my Arabic was good, might have marched near me in the demonstration to open Shuhada street. One of them, Mahdi al-Muhtaseb worked in two separate sweet-pastry bakeries, was just about to get married.

I don’t want to force any parallels, or pretend to be some impartial observer. I know that I am a party to this conflict. I am an Israeli Jew. I recognize that the Israeli Jews killed often feel more similar to me, like they’ve shared more life experiences. I also recognize that my political opinions influence my mourning. That I see the Palestinians who are killed as coming from the oppressed side, and so. I also know that many more Palestinians are being killed. I also think that the circumstances around the Jewish Israelis being killed are usually less murky, and its usually more clear, in the micro sense, who the aggressor was. But maybe that’s just cause of the news I read. The people around me. I know that some may call me a terrorist sympathizer. Others will call me a faux-enlightened colonialist. I don’t think I’m either of those things. But of course I don’t, because I’m me, because some wiring in my head tells me that my opinions are righter than others’. I don’t actually know much at all.

I’m mostly stuck on the image of blood near the banana stand. It’s probably and trite and banal thing to say, but I hate this, all of it.