Galei Tzahal, Israel’s Army Radio, has been broadcasting up a creative desert-storm, if you will, this summer. Or so I’ve heard from others who have heard that others have heard (not a huge IDF Radio Listener myself, nor are most of my friends, or my friends’ friends, but my friends’ friends’ have friends who love the stuff). Under the guidance of Israeli radio mogul Idan Kweller, Galei Tzahal has broadcast their “summer journey” from a “different city throughout Israel” every week. This week, Kweller and his Krew at Galei Tzahal announced that they would be broadcasting live, on Wednesday night (tonight), from Susiya.

Wow. Now I’d head talk of the “most moral army in the world” and “clean and glimmering purity of arms” and stuff, but this is just above and beyond. What a stunning gesture by the army’s official radio station. Earlier this summer, Israel’s government and the IDF’s Civil Administration announced their plans to demolish basically the entire village of Susiya in the Southern West Bank because its Palestinian residents had built without permits (of course failing to mention that they were unable to get permits because they are Palestinian, or that the West Bank is, like, illegally occupied…) In response to the GovermentIDF’s announcement, Palestinians from Susiya and nearby villages, along with organizations and members of the Israeli “radical” (read: “actual”) Left have mobilized against this injustice, including a demonstration of over 700 people, a number of tours and solidarity visits (including an event in which four Israeli activists were arrested for the dangerous, State-threatening act of painting over graffiti that said “Death to Arabs” with their own, insidious-hideous-libidinous left wing drivel of “No to Violence) and, most recently, a fax-campaign through which thousands of people have expressed their opposition to the plans directly to the Civil Administration.

Despite all of these grassroots efforts, the government and its Civil Administration had not responded to the calls of either their barely-relevant-non-citizens, the Pakistilains or whatever, or their ethnically-proper-but-politically-wayyyyy-out-of-line-citizens. Until tonight, when finally, breathtakingly, Israel’s own army radio decided to take a stance once and for all against the injustice of the destruction of Susiya! To Stand up for Justice! To Protest Against the Occupation! To Say No to Racism and Apartheid! To broadcast live from the village of Susi–

Yes. We should. And so: two hours from now, at 6:00 PM, Palestinian and Jewish activists, organized by Solidarity, will gather in Yafo at the offices of Galei Tzahal to protest this attempt to whitewash the occupation and to “normalize” the abnormality of apartheid-like conditions engendered by the settlement enterprise. Facebook event here. Stay tuned for updates.

Update: Pictures from the protest: 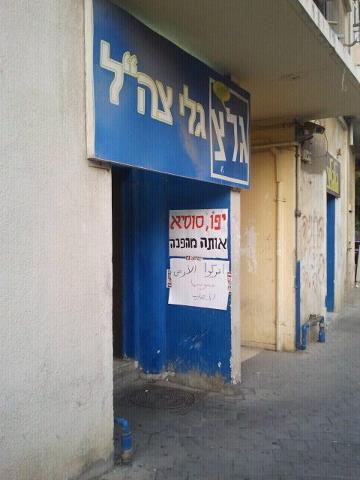