On Friday, February 6th, around 70 Israelis went on a tour of the South Hebron Hills, led by the indispensable Breaking the Silence and Ta’ayush, and sparked by the rad group of Jerusalem activists who’ve been organizing actions together since the summer. It was a powerful, moving, sad and beautiful tour that lasted almost 9 hours. Here are 18 snapshots from the day, for those who weren’t able to make it. 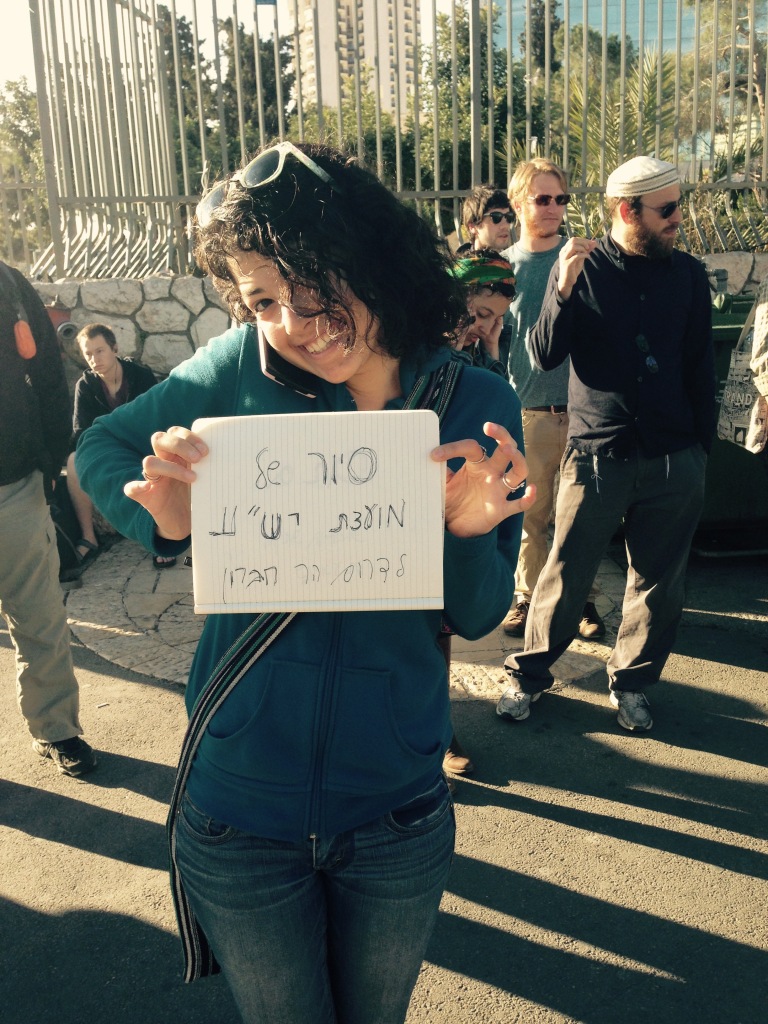 It is important to have some humor amidst all of this. Michal, one of the aforementioned rad activists, holding a sign that says: “Yesha Council Tour to the South Hebron Hills.”

The guide from Breaking the Silence was Shay Davidovich. Shay grew up in the settlement of Ariel, and enlisted in a combat unit at age 18, determined to protect his home and family. Speaking to the group, Shay told of one of his first missions while guarding a West Bank settlement: He was called out of the guard tower, and into a jeep, and they began pursuing a suspect. Nervous, and tense, everyone had cocked their guns, and then Shay saw who it was they were pursuing: a naked child, no older than five years-old, wearing nothing but boots and hysterical with fear. This story, to him, illustrated both the absurdity of the situation in the occupied territories. When he tried to talk about it with friends and family, he realized another thing: how little his own family and everyone around him knew about what combat soldiers actually do, on a day to day basis, while serving in the territories. This is what brought him to Breaking the Silence.

About 70 people showed up for the tour, and the first stop was near of a settlement outpost called “Lucifer’s farm.” Shay explained: this outpost was founded by a farmer named Yaakov Talia, who grew up in South Africa, under a different name. When Apartheid ended, Talia converted to Judaism, changed his name, and moved to the West Bank to establish a his own settlement. Since the 1994, at least 102 settlement outposts have been established, violating not only international law but also Israeli law. Rather then demolishing them, though, the Israeli government provides protection, as well as electricity, water and other services to many of these outposts. The Palestinian villages, in the area, on the other hand… 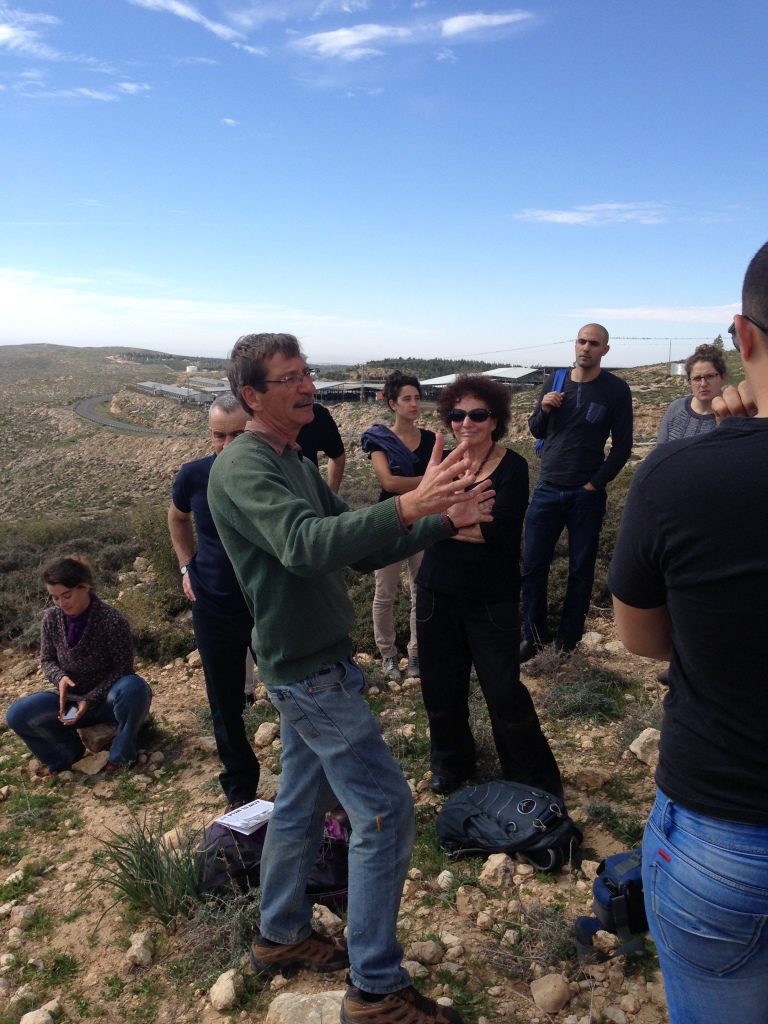 The guide from Ta’ayush was Amiel Vardi, a Professor of Classics at Hebrew University, and an active member of Ta’ayush for the last 12 years. Amiel is in the South Hebron Hills multiple times a week, and told the group of Ta’ayush’s efforts to work with local Palestinian farmers, shepherds and activists, as well as with Human Rights and legal organizations, to ensure that the Palestinians in the area have access to their land. Illustrating the constant harassment and oppression Palestinians in this area face, Amiel told a story: Soldiers, in training, are often ordered to raid Palestinian houses in the area (Shay had earlier emphasized that these training raids were done specifically on houses in which there is no one suspected of involvement in violence or criminal activities, so as not to interfere with the Shabak’s and the Intelligence’s information gathering). In the process of these raids, soldiers flip over everything in the house. In many cases, people in South Hebron Hills, whose main sources of income include shepherding and agriculture, will be preparing butter, which takes about eight hours – and then, just like that, a days work, precious income, and dignity, spilled out onto the ground.

Davidovich: "when i was a reserve soldier here they had us 'practice taking over a village in South Lebanon.' How? In a Palestinian village" 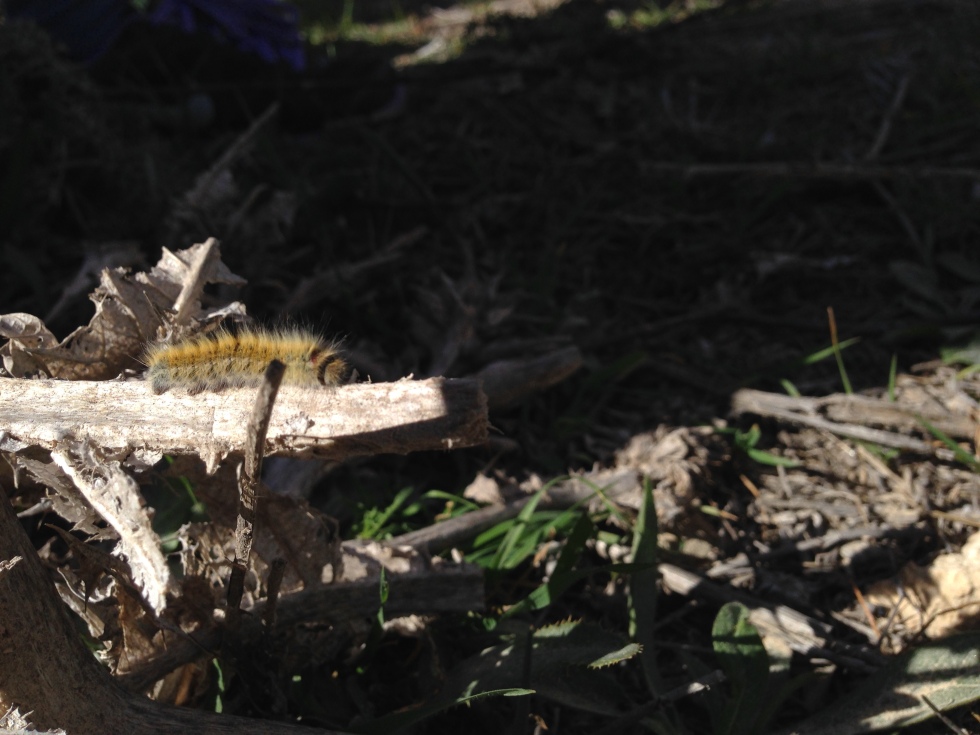 There were hundreds of fuzzy caterpillars everywhere. This contrast between natural beauty and unnatural systems of oppression felt like a theme of the day.

The next stop was Susiya. In 1986, Palestinian Susiya was demolished and its residents were expelled after the Israeli authorities discovered the remnants of an ancient synagogue below. The sign reads: “Susiya: The Ancient Hebrew City.” 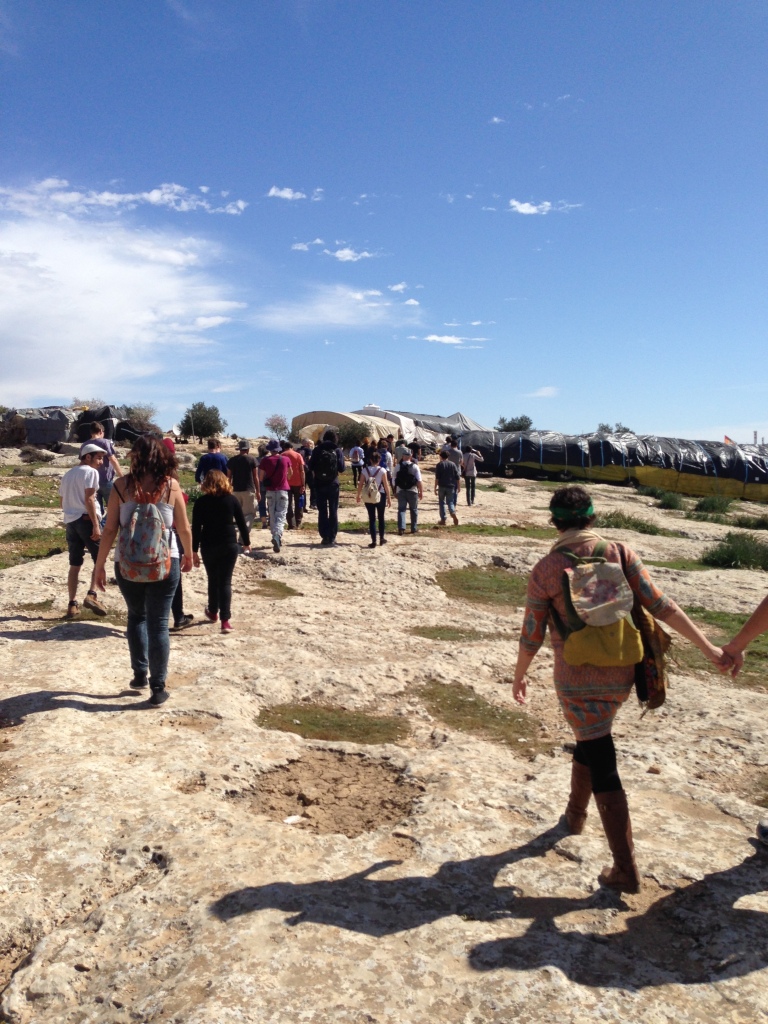 The residents of Susiya then rebuilt their village on their agricultural lands. The new Susiya has been consistently threatened with demolition as well (“Why Susiya is Illegal“) and in 2001, the residents were rounded up on trucks and taken away from the village. However, following the intervention of a number of activists from Ta’ayush and Human Rights NGOs, the Israeli Court ordered that this expulsion was not done legally, and that the villagers should be allowed to return. When questioned about why they had been taken away, the army’s response amounted, more or less, to “A commander acted of his own accords.” ie. “Oops.” In 2012, Susiya was once again threatened with demolition and expulsion. 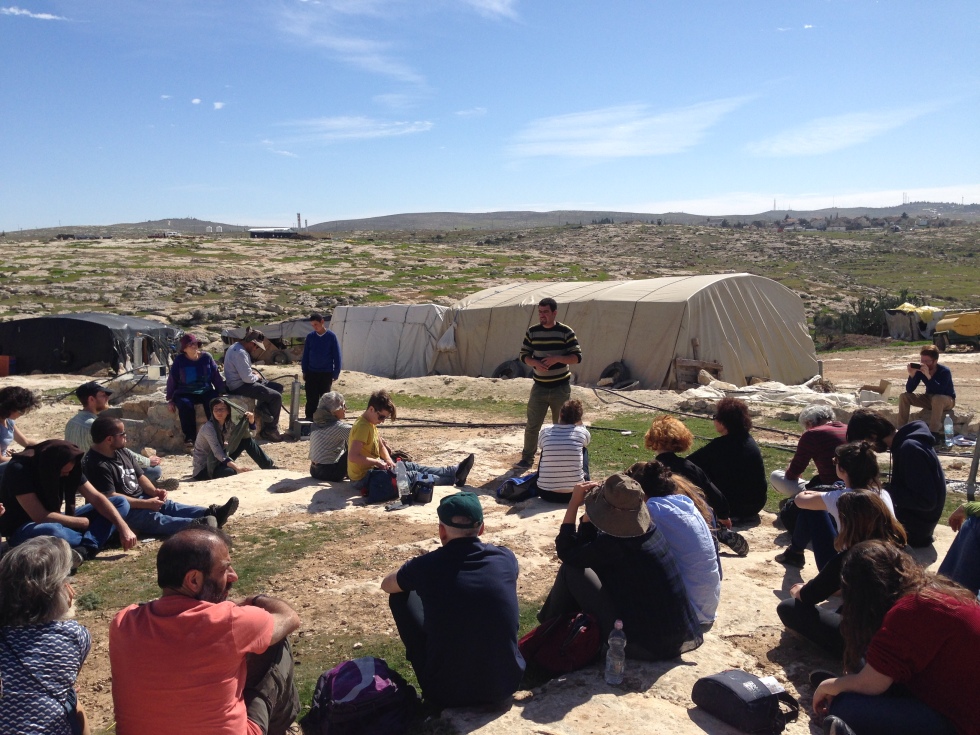 Nasser spoke about a number of issues faced by residents of Susiya, including water insecurity. The village is not hooked up to water systems, and the villagers are often beaten by settlers and harassed by soldiers when they go to the well to fetch water. Many have to buy cubes of water from the nearby city of Yatta, and the price is astronomical, compared to the nearby settlements or inside of Israel. Nasser asked the group: How much do you pay for a cube of water? Most people couldn’t answer, a few estimated around 5 or 8 shekels. Nasser then told us that here in the South Hebron Hills, Palestinians need to pay between 35-50 shekels per cube. “If someone in israel pays around 5 or 10 shekels for a cube of water, we here pay around five or ten times that. How is that just?”

A quote from a Mahmoud Darwish poem, written on one of the tents in Susiya: “On this earth, there is that which deserves life.” 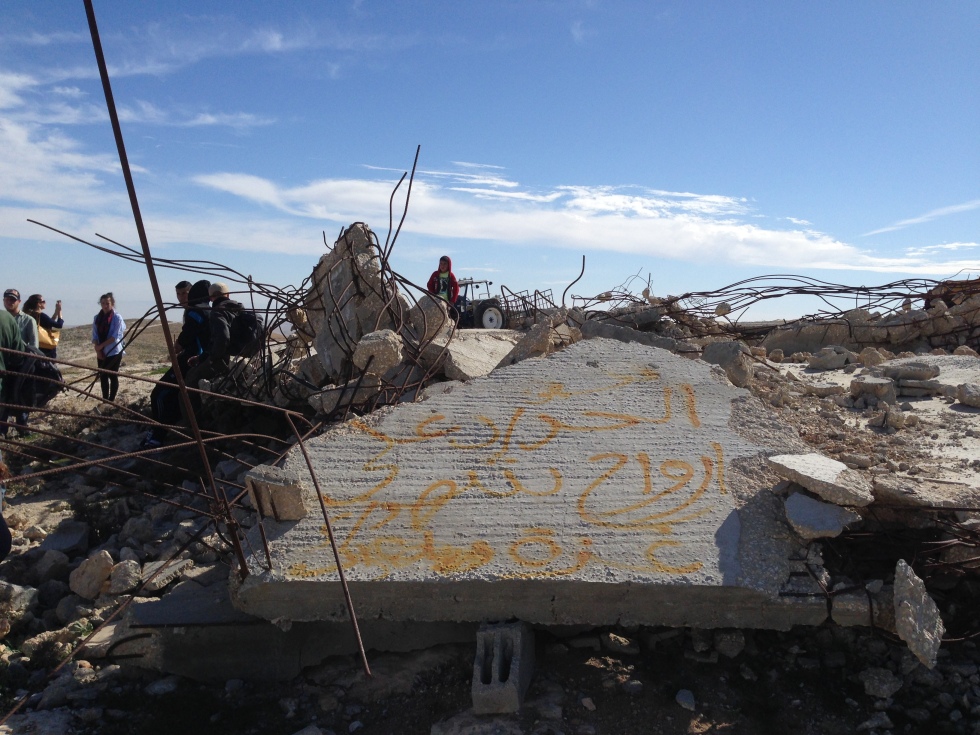 The next stop was a village called Al-Mufaqara. The first thing we saw there was the remnants of the village’s mosque, destroyed by Israeli bulldozers. 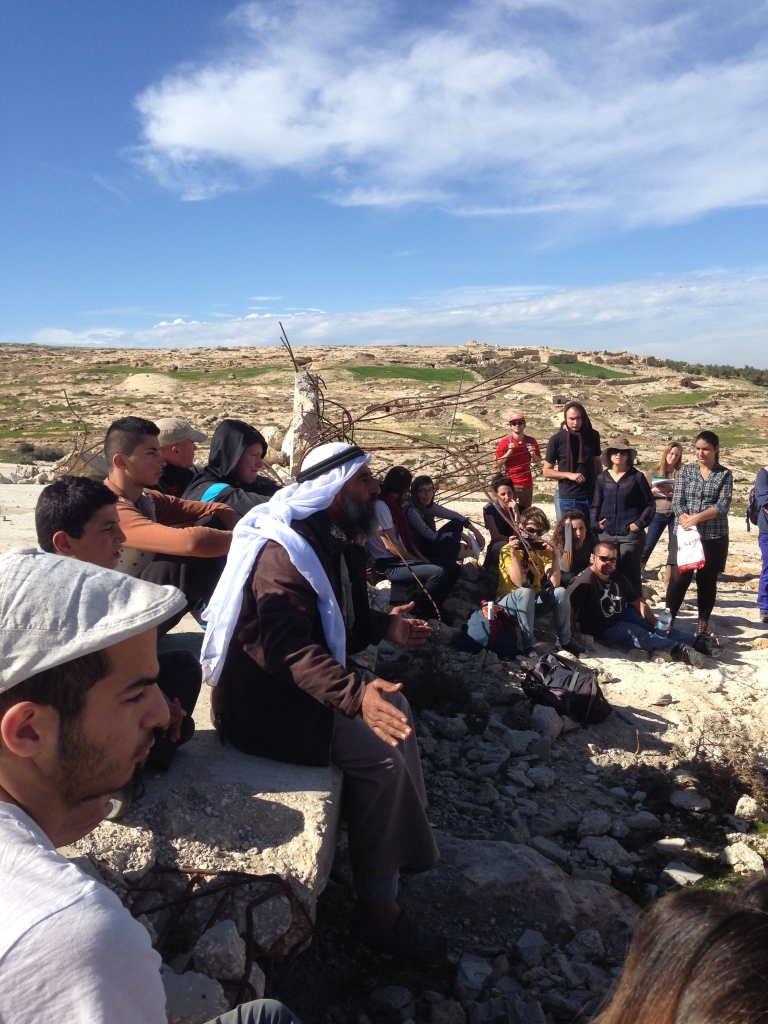 On a water tank in the village: “In the name of God, the compassionate and the merciful.” 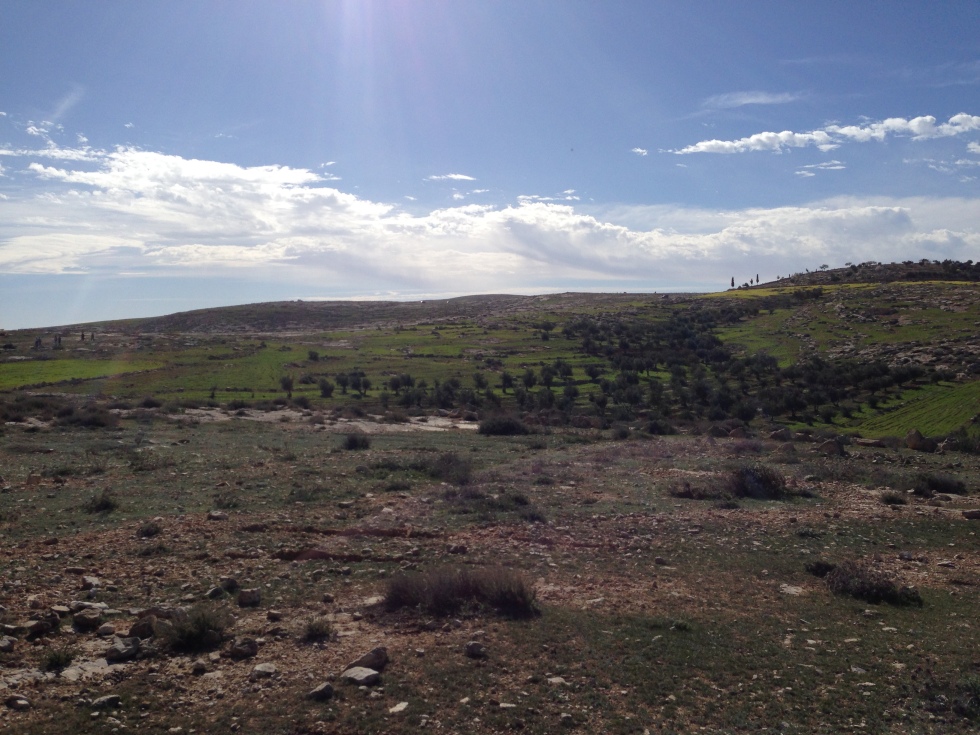 Everything seemed peeled away there: beautiful, stark, slow, gentle, cruel, decent, hopeful, broken. I left inspired by Mahmoud and Nasser, motivated by Shay and Amiel and the organizers and the tour’s participants, and committed to continuing to struggle against the desecration of human dignity that our leaders are facilitating and encouraging in the South Hebron Hills, and against the blindness and apathy that allow desecration to continue unchecked.

Post Script. To end on a note that is both humorous and awful: In our final stop, the village of A-Tawane, a few of us noticed that the buses we came on, driven by Palestinian drivers, bore advertisements for Birthright.